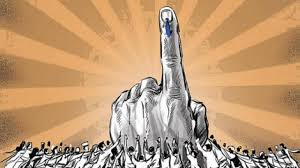 Much awaited peoples’ verdict after the maiden elections to the District Development Councils (DDCs) conducted after the reorganisation of the erstwhile J&K state and abrogation of Article 370 is out.  The results have proved beyond doubt that the people of J&K have full faith in Indian democracy and they are as much interested in development as the rest of the countrymen. The results coincided with the onset of Chille-Kalan, the spine-chilling coldest part of the winters, because of which the heightened hopes of the status quo lobby of displaying their annoyance with the Central government have been buried deep inside the wintry snow.

The verdict clearly signals the victory of democracy over the false narratives of alienation, loss of confidence, special status, change in demography,  cheating and betrayal. It is the defeat of communal and hate politics practised by the Kashmir-centric parties who tried their best to portray Bharatiya Janata Party as a “party of Hindus” and create Hindu-Muslim divide in order to keep BJP away from Valley politics. It is the defeat of status quo lobby which forgetting all their political and ideological differences ganged up together to demand restoration of Article 370 and special status as perceived by them because the Constitution of India does not refer to any special status for J&K.

The results of 278 seats out of 280 for which the elections were held have been declared. While the Gupkar Alliance has won 112 seats, BJP has emerged as the single largest party with 75 seats (including three from Kashmir) closely followed by the National Conference with 67 seats (including 24 from the bordering districts of Ramban, Kishtwar, and Rajouri).  Incidentally, the Independents have emerged victorious on 50 (32+18) seats more than the combined total of the other regional parties comprising the alliance. Among the alliance members PDP has won 27, People Conference 8, People Movement 3, CPM 5 and PDF 2. Congress as usual is sinking and has managed only 26 seats while the newly launched JK Apni Party has bagged 12. Two seats have been won by the Panthers Party and BSP has won one. Party wise percentage of seats won is BJP-26.98%, NC-24.10%, PDP-9.71%, PC-2.88%, PM-1.08%, CPM- 1.80%, PDF-0.72%, Congress-9.35%, JKAP-4.32%, Panther-0.72%, BSP-0.36% and Independents-17.99%.

The seven party Peoples’ Alliance for Gupkar Declaration (PAGD) was formed under the chairmanship of Dr Farooq Abdullah whose main motive was to seek restoration of Article 370 and return of statehood. These parties individually earlier had refused to participate in the Panchayat and BDC elections. Later they stated that they would not participate in any elections till their demand of restoration of 370 is met followed by an announcement that all orders/ statutes declared after 05 August 2019 were illegal and hence they would not recognise them. Realising that they have gone too far and such an insistence may make them totally irrelevant in mainstream politics which may lead to they being labelled as Hurriyat-2, they changed the decision and announced their participation in the elections as an alliance.

Congress as usual was wanting to piggy back on the alliance but the Central unit of the party put a lid on their hopes announcing that it was not part of the Gupkar Alliance. However, the local unit had different plans. It portrayed to the people of Jammu its adherence to the diktats of party high command hoping that it could win some seats in Hindu majority districts. But it failed to fool the people who had read their mind well leading to its total washout in these districts. As soon as the results were announced the cat was let out of the bag by none other than the Chief Spokesperson of the party by stating, “We were part of the alliance. Where ever Congress has won it is with the help of alliance and wherever alliance has won, it is with the help of Congress.” The usual Congress tactics of opportunistic politics and sharing the spoils of power with limited numbers. Incidentally, NC has replaced Congress as number two party in Jammu region.

Despite the opposition ganging up against the BJP in both Jammu and Kashmir regions, the party contested the elections vigorously and left no stone unturned to retain its clout in Jammu region but also worked tirelessly to strengthen its base in Kashmir Valley and break the stranglehold of the Kashmir-centric parties. Though Lotus is the state flower of J&K and grows in abundance in Kashmir, BJP so far had been unable to ensure the blooming of political lotus in Kashmir. But for the first time and that too after abrogation of 370 BJP has succeeded in gaining foot hold in Kashmir by winning three seats, one each in the three regions of Kashmir. It has sent shockwaves among the leaders of Gupkar alliance which claimed to have entered the electoral fray only to checkmate the BJP and prevent it from gaining entry into their exclusive stronghold so that they could continue to promote the politics of “exclusivity”. This will now force them from remaining a mere alliance to transform into a formidable political front for all political battles in future. A major challenge for BJP.

BJP also cannot rest on its laurels but will have to work hard to woo 70% Kashmiri voters which stayed away from this election. In order to fulfil its dream of “Panchayat to Parliament” in Kashmir, BJP will have to come out with innovative and “out of box” initiatives to win over the Kashmiris. BJP has to prove that it is different from other parties by erasing the image of “lack of sincerity” perceived about Delhi by majority Kashmiris. BJP has no option but to walk the talk.

As the verdict was unfolding and the alliance was faring well in Kashmir, the Gupkaris suddenly changed the narrative from preventing BJP to make inroads in Kashmir and annihilating it in Jammu to the referendum of the government’s decision of 05 August 2019 to abrogate Article 370 and 35A.

Even before the final tally had emerged both Mehbooba Mufti and Omar Abdullah, leaders of the Gupkar Alliance, took to twitter claiming endorsement of their stand of restoring status quo ante as before 05 August 2019, contrary to their initially avowed aim and purpose. “Today’s DDC results have made it clear that people of J&K voted Enmasse for @JKPAGD thus rejecting the unconstitutional decision to abrogate Article 370. They have overwhelmingly supported @JKPAGD which stands for restoration of J&Ks special status,” tweeted Mehbooba Mufti. A similar tweet from Omar Abdullah also followed. These were followed by a series of tweets and statements by other leaders of the alliance. A clear cut attempt to hijack the victory of democracy by changing the narrative.

Desperate to remain in limelight and hog media headlines through sensational and emotional outbursts has forced these leaders to inculcate the habit of putting their foot in the mouth. Truly speaking when the successful conduct of the DDC elections and wholehearted participation by the people coupled with no boycott call or terror acts in the first election held after abrogation of Article 370 were being hailed as the victory of Indian democracy by the media and intelligentsia across the nation, the otherwise interpretation of the same by the Gupkar Alliance was not unexpected. The politics of Gupkar Alliance has always revolved around hollow slogans, false and broken promises as well as false and manufactured narratives to emotionally exploit the public.

It was anticipated and expected that after the results were declared, the parties would interpret the results based on the narrative they wanted to sell post the elections. Having to eat a humble pie after failing to stop the BJP from making inroads in Kashmir despite total polarisation and anti-BJP propaganda unleashed by the Alliance, it had no option but to change the narrative towards referendum of demand for restoration of Article 370. Unfortunately their assertion is a false claim as statistics speak to the contrary.

The mandate received by the alliance to form the District Councils which is laced with the hope of local development is well appreciated and the alliance deserves to be congratulated. But their attempt to unilaterally change the narrative deserves not only refuting but condemnation as well. The total votes polled by the seven party alliance is much less than the votes polled by BJP singularly.7,08,714 (24.82%) votes were polled in favour of the BJP alone  and the alliance together has polled 6,43,274 votes (22.50%).Interestingly, newly formed Apni Party (5.30%) has won less number of seats (12) than the 26 of PDP its vote share is larger than the PDP (3.96%). If all the votes of the parties against restoration of 370 are added the tally jumps to nearly 15 lakhs while the total votes polled were 28, 55, 509. A clear cut verdict against the status quo agenda of the Gupkaris and in favour of development and better future sans terrorism and radicalism. It is also a big blow to those who have labelled BJP as a “party of the Hindus, by the Hindus and for the Hindus.”

The Gupkaris will do well to serve the people and address their basic needs of connectivity, water and electricity for which people have reposed their faith in them while upholding the dignity of the Indian Constitution and the National Flag rather than once again resorting to rhetoric of restoration of 370 which would always remain a distant dream. Rather than selling manufactured narratives, the people want that their basic necessities and needs be provided to them.

Farmers’ Bill: Apprehensions, doubts cleared by govt
Hefajat-e-Islami and the Politics of Islamism in Bangladesh
Comment