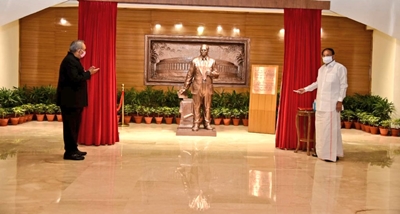 Vice President Venkaiah Naidu today said the Comptroller and Auditor General, CAG is a strong and credible institution and the credit for this must go to the framers of the Constitution, particularly to Dr BR Ambedkar. He said Babasaheb Ambedkar had the vision to ensure independence and a wide mandate to the CAG.

The Vice President said this while unveiling the statue of Dr. Ambedkar at CAG office in New Delhi. He said the CAG has evolved as an enabler to Balasaheb’s vision that not only ensures public financial accountability but also acts as a friend, philosopher and guide of the executive.

Mr Naidu said Dr. Ambedkar was a multi-faceted genius and builder of modern India. He added that the nation will be ever grateful to him for his stellar contribution in drafting the Constitution and for guiding the nation at a critical juncture. He further stated that Dr. Ambedkar was the messiah of the oppressed and all through his life, he strove to dismantle the caste barriers.

The Vice President said Babasaheb strongly believed in gender equality and emancipation of women through education.