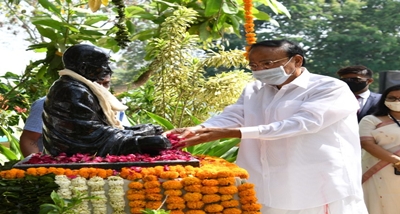 Vice President M. Venkaiah Naidu has said that Mahatma Gandhi’s Non-violence is not only for physical terms but also for the spoken words and thoughts. Mr. Naidu was addressing the concluding ceremony at National Salt Satyagrah Memorial in Dandi Gujarat. The re-enact of Dandi Yatra was flagged off by the Prime Minister Narendra Modi from Sabarmati Ashram on 12th March.

The Vice President said that people may be political opponents, but they all are Indians and should work for the development of the country.

Referring to the Vaccine Maitree program amidst the Coronavirus pandemic, Mr. Naidu said that today India is respected worldwide under the leadership of Prime Minister Narendra Modi. He said that the inspirations of Mahatma Gandhi and Sardar Patel will take us towards the bright future.

Speaking on this occasion, Gujarat Chief Minister Vijay Rupani said that today is the historic day in the freedom struggle of India.  He said that this is the time to remember and pay tribute to all the freedom fighters during the celebrations of Azadi Ka Amrut Mahotsav.

Speaking on this occasion, Sikkim Chief Minister Prem Singh Tamang said that he is fortunate that he got the opportunity to participate in this Dandi Yatra. Vice President M. Venkaiah  Naidu also released the GI tag for the famous handicrafts of Patan of North Gujarat on this occasion.