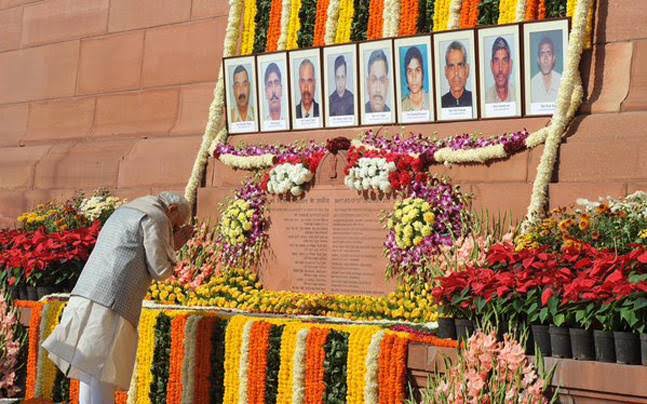 On the 18th anniversary of the attack, Union Home Minister Amit Shah, former Prime Minister Manmohan Singh, Congress leader Ghulam Nabi Azad and other members of the Parliament also paid floral tributes to the 14 security persons who lost their lives in the terrorist attack. Taking to Twitter, President Ram Nath Kovind tweeted: “A grateful nation salutes the exemplary valour and courage of the martyrs who sacrificed their lives while defending the Parliament from terrorists on this day in 2001. We remain firm in our resolve to defeat and eliminate terrorism in all its forms and manifestations.”

On December 13, 2001, five heavily-armed terrorists belonging to terror outfit Lashkar-e-Taiba (LeT) and Jaish-e-Mohammed (JeM), stormed the Parliament complex in New Delhi and opened fire indiscriminately.
Around 14 people, mostly security forces and one civilian, were killed in this incident.The incident took place around 40 minutes after Parliament was adjourned and about 100 members were present in the building.