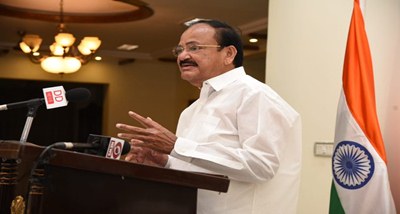 Vice President M Venkaiah Naidu has called upon the people to regularly practice Yoga and meditation and return to our traditional food habits to beat the stress caused by modern lifestyle and prevent non-communicable diseases (NCDs). Launching the Society of Coronary Surgeons in Hyderabad, he pointed out that the scientific community has concluded that inappropriate lifestyle was the major cause for the raise in the cardio-vascular diseases (CVD) incidence. He said that Yoga relieves one of stress and keeps diseases at bay. Hence, Yoga must become part of everyone’s daily routine.

Quoting WHO, Mr Naidu said NCDs encompass a vast group of illnesses such as cardiovascular, chronic respiratory diseases, cancer and diabetes and contribute to around 41 million (71%) of all the deaths globally and about 5.87 million (60%) of all deaths in India.

The Vice President urged the members of Society of Coronary Surgeons (SCS) to focus on the disease burden in the rural areas. He said that a majority of the people live in the rural areas and are equally exposed to the risk factors of cardio-vascular disease.