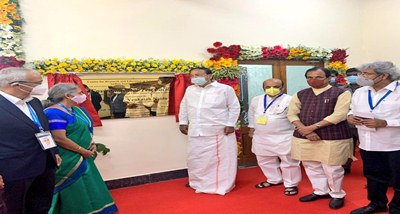 Vice President Venkaiah Naidu called upon Scientists and researchers in the country to work with ancient knowledge and modern technology to take the country forward.

He said that the scientific community in the country has the yeoman task of making India atma nirbhar.

Addressing the gathering at the Centre for Research and Education in Science and Technology, CREST in Hoskote near Bengaluru today, the Mr. Naidu congratulated the scientists and engineers of the country for their incredible work in developing major scientific facilities for the future generations.

Speaking about his experience of visiting the CREST campus of Indian Institute of Astrophysics, He noted that the campus was the finest example of our commitment to basic research and technology development for future generations which will lay the foundation for an atmanirbhar Bharat.

He lauded the plans of the institute to have a science centre in the campus for spreading awareness of science and curiosity among children and general public.

This he said is a step towards spreading scientific awareness.

He congratulated the Indian Institute of astrophysics for celebrating 50 years of their service to the nation.