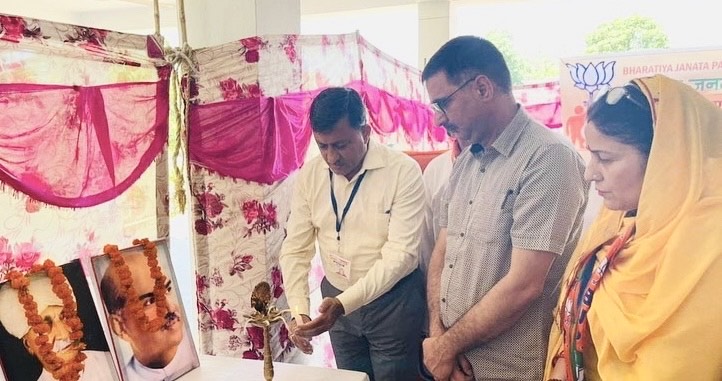 JAMMU: BJP J&K general secretary and former MLC Vibodh Gupta inaugurated two day Prashikshan Varg of Bharatiya Janta Party Naushera Sunderbani district . The three day Prashikshan Varg was inaugurated by lightening the traditional lamp.
BJP District office bearers, DDC members BDC chairperson senior leaders and mandal presidents participated in the training workshop.
Addressing the workers, Vibodh Gupta said that Bharatiya Janta Party has come a long way due to the tireless hard work and commitment of the party workers. The party which started with two MPs, has 302 MPs today and has become the world’s largest party. He asserted that from the charismatic leadership of Shri Shama Prashad Mukherjee to present Narendra Bhai Modi Ji’s leadership, party has maintained its ideology of Nation first, Party second and Self last.
Vibodh further urged party workers to enthusiastically participate in the programmes to mark the eight years of the Modi government that will begin on May 30 and go on till June 15. He told them that the focus of these programmes will be on service, good governance, and welfare of the poor. He hailed Modi government for coming up with schemes benefiting all the sections of the society. He expressed the need to highlight and publicise the central welfare schemes so that citizens could reap their benefits.
Speaking on the occasion, BJP Prabhari Naushera Dinesh Sharma said that BJP in last 8 years has focused on Sabka Sath, Sabka Vikas Aur Sabka Vishwas and improved lives of millions of people. He also highlighted various welfare measures and schemes initiated by Hon’ble PM Narendra Modi led  central government. He told party workers to organise routine interactions with general public and make note of theirs concerns.
District president Captain Bal Krishna also spoke on the achievements of Bhartiya Janta Party and asked the workers to highlight the steps taken by BJP government to ensure good governance and poverty alleviation. Ex district president captain Som Dutt and senior BJP leader Pritam Sharma also spoke on the occasion.
The Dispatch is present across a number of social media platforms. Subscribe to our YouTube channel for exciting videos; join us on Facebook, Intagram and Twitter for quick updates and discussions. We are also available on the Telegram. Follow us on Pinterest for thousands of pictures and graphics. We care to respond to text messages on WhatsApp at 8082480136 [No calls accepted]. To contribute an article or pitch a story idea, write to us at [email protected] |Click to know more about The Dispatch, our standards and policies