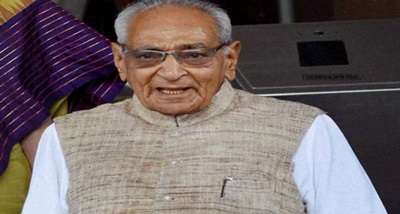 Veteran Congress leader Motilal Vora passed away at a private hospital in New Delhi today. He was 93. Mr Vora was detected with COVID-19 in October but he recovered and got discharged. Two days back, he was admitted to the hospital with a urinary infection.

Motilal Vora was elected to the Madhya Pradesh Assembly six times and served twice as Chief Minister of the State. He was Member of Rajya Sabha four times and the Lok Sabha for one term. He also served as Governor of Uttar Pradesh and Union Minister of Health and Family Welfare and Civil Aviation.

President Ram Nath Kovind has expressed sadness on the demise of veteran Congress leader Motilal Vora. In a tweet, Mr Kovind said, he was humility personified, and belonged to a generation of leaders who carried their politics with unflinching conviction till end. He expressed condolences to his family and friends.

Expressing grief on the demise of Mr Vora, Prime Minister Narendra Modi said, Motilal Vora Ji was among the senior-most Congress leaders, who had vast administrative and organisational experience in a political career that spanned decades. He expressed condolences to his family and well-wishers.

Congress leader Rahul Gandhi said, Motilal Vora was a true Congressman and the party will miss him very much. He expressed condolences to his family and friends.