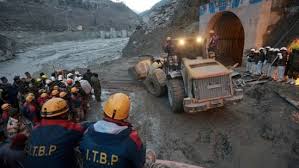 In Uttarakhand, rescuers have recovered two more bodies this morning from tunnel of NTPC power project in Chamoli district. So far, 53 bodies have been recovered, while 151 people are still missing. AIR correspondent reports that rescue and search operation for the missing persons continued whole night today at Tapovan tunnel. Still there is no sign of life in the Tunnel in which around 25 to 35 people are said to be trapped since 7th February.

Rescue teams have started recovering bodies from inside the main tunnel as well as from the Rishi Ganga power project site at Raini Village. Almost all bodies have been identified and those who lost their lives were from states like Uttar Pradesh Himachal Jammu Kashmir and Bihar as well as the local people. bodies are being handed over to the families who are here and some bodies along with the recovered human parts were cremated with all rituals.

Shanti path is being organised daily at Narsingh temple in joshimath for those who lost their lives in this natural calamity. Meanwhile connectivity is also being restored at both places at raini and at Tapovan. An approach bridge has been prepared by border road organisation and one rope bridge is also functioning at the Tapovan.