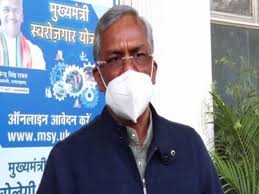 Ahead of his visit to the areas affected due to glacier burst in Chamoli on Tuesday, Uttarakhand Chief Minister Trivendra Singh Rawat on Monday held a meeting with officials of Indo-Tibetan Border Police (ITBP), National Disaster Response Force (NDRF), State Disaster Response Fund (SDRF), state Police and other agencies in Joshimath to review the rescue efforts in Tapovan.

After the meeting, the Chief Minister said all four forces are working in coordination, and rescue operation is underway.

“In Tapovan, had a meeting with IG, DIG, DM, SP, Army, ITBP, senior officials BRO and project in-charge officers of NTPC to review the relief and rescue operations. At the same time, the DM was instructed to brief the media from time to time so that misleading and false news is not spread,” tweeted the Chief Minister after the meeting.

Rawat on Monday said that he will visit the areas affected due to glacier burst in Chamoli on Tuesday and will also meet people there.

“Tomorrow I plan to visit the affected areas and will also meet people. Our relief and rescue operations are continuing in full swing and we are doing our best to save lives.

SDRF on Monday said that 26 bodies have been recovered from different areas that were affected by the glacier burst in Chamoli district in Uttarakhand, while 197 people are still missing.

“So far 5 people have come forward and reported their presence to administration. Around 35 more people are stuck in a tunnel and efforts are on to rescue them,” said SDRF.

A glacial broke in the Tapovan-Reni area of Chamoli District of Uttarakhand on Sunday, which led to massive flooding in Dhauliganga and Alaknanda rivers and damaged houses and the nearby Rishiganga power project.

So far, the bodies of 24 people have been recovered from different places following the avalanche, Uttarakhand Police said.