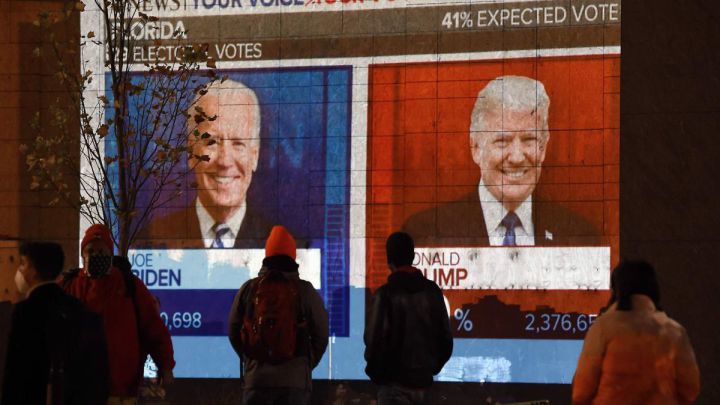 US President Donald Trump has not conceded his defeat in the presidential election and is planning to challenge the results. He has been talking about voting fraud and stolen election and reports say that he refuses to hand over White House keys. This post-election development is not just reflexive outburst of a defeated leader, but stems out of the very system of American election.

Presidential election in the US, an event of immense global significance, has pushed back news about COVID-19 and all national news in our country. India doubtless needs and values American goodwill and friendship – a position that will not change whoever becomes the President as it does not depend on the personality of the President or the party to which he belongs.

The Democratic Party candidate Joe Biden is declared elected as 46th President of the US as he has secured 290 Electoral college votes out of the total of 538 establishing clear majority over   the outgoing President of the Republican Party who got 214 votes. The verdict has denied a second term to the incumbent President mostly won by previous Presidents. Trump is the sixth President not getting second term.

Entire India was watching closely the course of counting of votes, but only a few have knowledge of the electoral system which is most complicated and in fact not a model to be copied. It is a system that gives federalism and States much more importance than other federal Constitutions. But, as a method of selecting the most popular candidate as the nation’s President, the system is not without blemishes.

United States of America is a union of States that were independent entities which came together and formed the Union. It was created by the States and not the States by the Union or Centre as in India. Benjamin Franklin’s call for integration of colonies “to Join or Die” in 1765 gave birth to USA. It now consists of 50 States.  All elections – federal, state, and local – are administered by individual States and not by a central Election Commission. Hence, States still hold certain electoral powers and functions. It has resulted in different rules and procedures in different States governing conduct of election – a situation peculiar to the USA.

The American President of a nation considered to be defender of individual rights and freedoms par excellence is elected indirectly by people of each State through electoral colleges. An electoral college refers to the group of Presidential electors required to form every four years for the purpose of electing the President and Vice-President. Each State is assigned a certain number of electoral votes depending on the population of that State. The Constitution prescribes that each State shall appoint electors selected by State-wide popular election on the same Election Day in November in the Election Year in a manner determined by its legislature. Boundaries of electoral districts and decision on single or multi-member constituency in a State are made by concerned States.

Electors pledge to vote for a particular candidate and the voting public goes by faith in the electors to honour their commitment. They are their party loyalists. The number of electors of a State is determined by the combined number of representatives of the State in the House of Representatives and Senate – a provision that recognises the importance of population size and the concept of equality of States in choosing the President.

At present, there are 538 electors in the electoral college and the majority mark of 270 votes are required to win the presidency. If no candidate secures majority, a contingent election is to be held whereby the US Congress is required to elect the President and Vice-President. At the same time, 435 Electors who secure most votes in their respective States constitute the House of Representatives also known as the Congress.

“Faithless electors” like “defectors” in India are not unknown, but some States have laws against them. The Supreme Court also curbs Faithless Electors in Presidential election. In 2016, ten members of the electoral college voted or attempted to vote for a candidate different from the ones to whom they pledged support. Three of these were invalidated under Faithless Electors Law of their respective States.

The candidate who wins majority of popular votes or the largest votes in the State receives all its electoral college votes – a system known as “winner takes all”. The winner can elect every office within a given district or jurisdiction which is in sharp contrast with proportional representation which is related to the voting power of the parties.

The electoral college system suffers from a serious drawback that it does not ensure the election of the person getting most popular votes as President. It is possible for a candidate to win the electoral vote and lose the nation-wide popular vote. Four Presidents including George W. Bush in 2000 and Donald Trump in 2016 were elected by securing less popular votes than their opponents. In 18 elections between 1824 and 2000 Presidents were elected without popular majority. Notable is Abraham Lincoln, who became President in 1860 by winning less than 40% of popular votes.

In view of this situation, critics of Parliamentary system adopted in India who point out the possibility of obtaining parliamentary majority by winning minority of votes most common in India have to think several times before advocating change. No electoral system devised so far guarantees election of the most popular candidate(s). Even the direct democracy of ancient Athens, if transplanted in India, will face dominance of the rich, upper castes, male and so on.  Gram Sabhas do not ensure equal participation of all villagers.

However, it must be admitted that the electoral college system provides the President a sense of national acceptance and mandate for governance. It safeguards the interests of smaller and also sparsely populated States against suppression by bigger and more prosperous and vocal ones.

A major impact of the system is on party politics in the US leading to a clear two-party system practically eliminating growth of a third party and independents. American electorate is polarized – every voter either Democrat or Republican.

All members of the US Congress – the federal legislature – are directly elected by the people of each State. President’s term is fixed meaning there is no mid-term election of President. If an incumbent dies, resigns, or impeached, the remainder of his term goes to the Vice-President and fresh election will take place on the scheduled date.

Record breaking numbers of mail-in votes and absentee ballots is a special feature of 2020 election and is suspected to give scope for fraudulent practices.

Constitutional amendment to introduce direct election of the President in the place of Electoral College is often mooted but not accepted. Bigger States want to retain their importance and smaller States to safeguard their voice. There are sections in India wanting Presidential system. But, American system is not any ideal type to be copied. India needs a strong centre for national unity and security and active States for progress and prosperity.