Both Iran and the United States (US) are among the countries worst affected by the COVID-19 pandemic. However, even as they fight their respective battles against the virus, the hostilities between the two continue. Both countries allege each other of violating international law. The tensions between the two countries took a sharp turn last year when, for the first time since the Iran-Iraq war, a series of events resulted in significant deterioration of peace and stability in the Gulf region. It all began after the waiver provided by Washington on purchase of Iranian oil expired in May last year. However, the most recent escalation in the US-Iran tensions at a time when the world is reeling under the COVID-19 pandemic has raised concerns in the region.

On April 15, the American ships deployed in the Persian Gulf reported an “unsafe and unprofessional” conduct by 11 Iranian Islamic Revolutionary Guard Corps Navy (IRGCN) vessels. In response, American President Donald Trump ordered the United States (US) Navy to “shoot down and destroy any and all Iranian gunboats if they harass our [US] ships.” Later, on the eve of IRGC’s launch of its first military satellite – Noor 1 – IRGC commander Salami affirmed, “[that] any [US] move will be responded decisively, effectively and rapidly.” He added that “IRGC is serious in defending the national security, and sea borders, and marine interests of Iran.”

The recent confrontation between the two countries, which reached unprecedented levels after the killing of IRGC commander Qassem Soleimani in early January 2020, has once again raised concerns about stability in the Persian Gulf. In May 2019, after the expiration of the US waivers on the purchase of Iranian oil, several American tankers were attacked in the Gulf of Oman for which Washington blamed Tehran and its proxies. Iran forthrightly denied these allegations. Later, in June 2019, the tensions further escalated as the IRGC shot down a US drone in the Gulf. Consequently, President Trump ordered a military strike on Iran, which was later called off, citing disproportionality. As both sides decided to de-escalate, the situation at the time was brought under control with no significant harm. 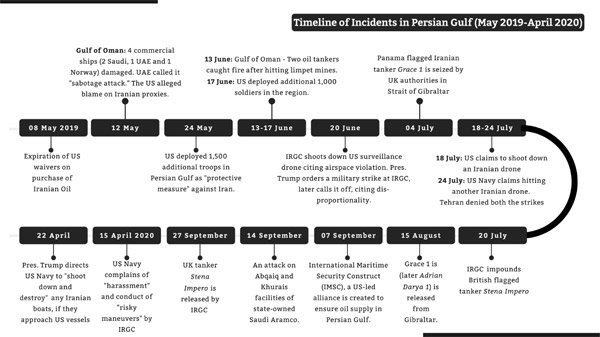 Source: Compiled by the author from various media reports.

Though the recent skirmishes have again revived fears of a renewed escalation in tensions between the two countries, however, based on outcomes of the past incidents, one can discern a de-escalation pattern aimed at avoiding a full-blown war. In May 2019, when things began to spiral, both sides came out with statements repudiating the possibility of war. From the Iranian side, Supreme Leader Ali Khamenei insisted that “There won’t be any war.” Similarly, the US Secretary of State Michael Pompeo ascertained that Washington “fundamentally” did not seek war with Iran.

There seems to be an unsaid predisposition to manage the escalation plateau. A full-scale war in the Gulf would have long-term disastrous consequences for all parties involved – US, Iran and regional powers – and not to mention, the frightful impact it will have on the global oil supply. Similarly, when an attack took place on Saudi Aramco facilities at Abqaiq and Khurais in September 2019, the escalation was steadily followed by a de-escalation. Last year, both countries also presented their multi-state initiatives to manage escalations. The US-led maritime coalition in the Persian Gulf, known as the International Maritime Security Construct (IMSC), became operational on September 7, 2019. Two weeks later, Iranian President Hassan Rouhani announced a ‘Coalition for Hope’ or Hormuz Peace Endeavour (HOPE) at the 74th session of the United Nations General Assembly.  However, the acceptability of these initiatives remains low, given the scepticism and deep mistrust in the region.

The recent tensions in April could be just another episode in brinkmanship between the two countries. It should be noted that the Iranian Navy’s actions came just a week before IRGC celebrated its 41st foundational day. Thus, the Iranian actions were more of posturing than any attempt at escalation. However, one cannot discount it entirely as semantics. From the IRGC’s perspective, it is believed that there is still a need to reinforce deterrence against the US after Soleimani’s death. In Washington’s viewpoint, it already has deterred Iran from taking bold steps by targeting its top commander in early January this year.

In the above context, it is important to identify potential developments that are most likely to guide the Washington-Tehran rivalry in the region. First, the arms embargo on Iran will be expiring on October 18, 2020. Already, Washington has started pushing for the extension of an arms embargo, but legal technicalities – due to the US withdrawal from the Joint Comprehensive Plan of Action (JCPOA) – makes it difficult for the US to achieve this easily. Meanwhile, the US Secretary of State Pompeo has made it clear that the US is “not going to let that [lifting of embargo] happen.” Washington’s influence at the UN is well-known, which the US is going to leverage to snap back the embargo.

Iran, on the other hand, has been preparing for the lifting of the embargo. In the last two years, it has moved to strengthen its partnership with both Moscow and Beijing that may help Tehran’s cause in October. Last year, in December 2019, Iran conducted a trilateral naval exercise in the Gulf of Oman with Russia and China to further enhance cooperation. Major General Mohammad Hossein Bagheri, Chief of Staff of Iranian General Armed Forces, has made multiple visits to Beijing and Moscow in the last couple of years. Earlier, in November 2016, Tehran signed a Comprehensive Strategic Partnership Agreement with Beijing followed by a military agreement in November. Moreover, both have also agreed to set up a joint technical and industrial commission. Similarly, Iran’s existing cooperation in Syria puts it in favourable conditions with Moscow. In mid-2015, Tehran had also acquired the S-300 Air Defence System from Moscow.

Furthermore, IRGCN’s ambitions also need to be factored in. The IRGCN, which so far has relied on small vessels to attain its objectives, has expressed its interest in developing a submarine fleet. The IRGCN commander made it apparent in the immediate aftermath of the confrontation with the US Navy on April 15. Whether enhanced capabilities will bring about any change in the way Washington views Tehran is something that remains to be seen. Tehran also has high hopes for the lifting of the embargo for which it has toiled hard to develop its partnership with two major powers. However, this partnership is unlikely to be of much assistance to Iran, except in the economic domain. Despite the COVID-19 crisis, Washington is likely to continue with the sanctions under its ‘maximum pressure policy’, something that Iran may find hard to manage given the circumstances.

To conclude, two factors are most likely to impact the current dynamics in US-Iran relations in the coming times. First, the probable consequences of the arms embargo on Iran that is scheduled to expire in October 2020. The ensuing push-and-pull will drive the rivalry further where Iran will attempt to hedge its bets with Russia and China. Furthermore, the uncertainty brought about by the COVID-19 pandemic would at best have a limited and short-term impact on the US-Iran hostilities. This is not to suggest that it would ease the rivalry, but the chances of escalation would remain limited, for the time being.

The author is thankful to Dr. Meena Singh Roy, Coordinator, West Asia Centre, MP-IDSA for her insightful suggestions and comments.

Conflict Weekly: Cyclone Amphan in the Bay of Bengal, Ceasefire in Afghanistan, Indo-Nepal border dispute in Kalapani, Honour Killing in Pakistan, New protests in Hong Kong & the Anti-lockdown protests in Europe
Ravi Shastri: From ‘chapati shot’ to booming voice from behind the mic to coaching voyage