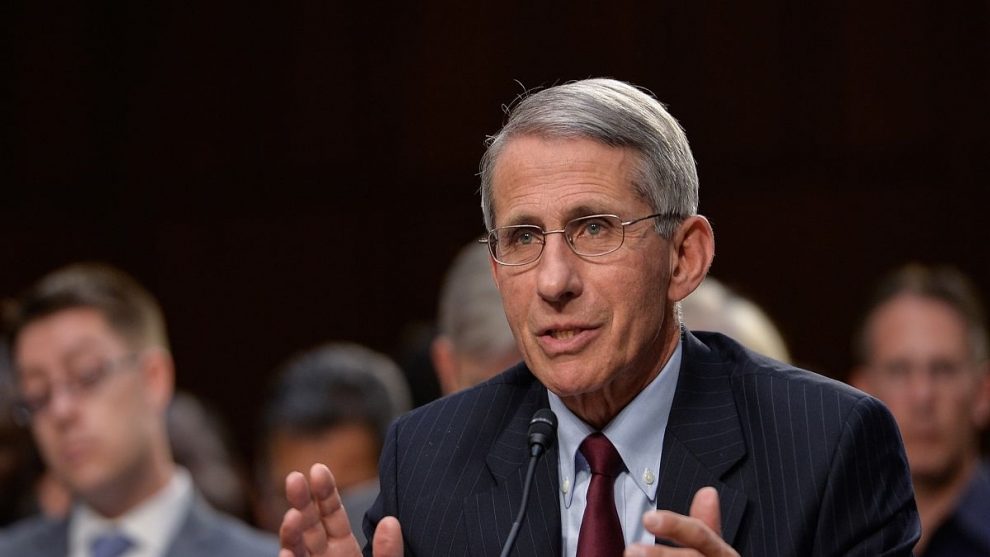 Washington: Terming the situation in India very desperate , America’s top public health expert Dr Anthony Fauci has suggested the government marshal all its resources, including the armed forces, to immediately build makeshift field hospitals, and urged other countries to help with not only materials but also personnel.

In an exclusive interview to PTI, Fauci, who is the Chief Medical Adviser to US President Joe Biden, also called for a nationwide lockdown, not necessarily for six months but for a few weeks to break the continuity and transmission of infection.

Dr. Fauci’s suggestions and dire assessment of India came as the number of new Covid infections in India officially passed 2 crore, almost double the number three months ago. Of these more than 2,20,000 people have died, according to official figures.

In contrast, the United States has recorded 3.2 crore cases and 5,77,000 deaths in a population that’s one-fourth of India’s 120 crore since the pandemic began. Still, because of India’s inadequate healthcare infrastructure, weaker economy and lower standard of living, the suffering has been magnified, especially in the second wave that has led to a huge shortage of oxygen and hospital ICU beds.

The government says the infection rates have consistently dropped since April 30, when it recorded more than 400,000 cases. It reported over 355,000 cases on Tuesday.

Given the fact that India is under such terrible stress right now with the extent of the outbreak, the rest of the world should pitch in to help, similar to what the United States is doing, he said.

The world can help by supplying India with materials, and perhaps even personnel, but certainly materials that they need to adequately address it (the pandemic), he said.

The 80-year-old physician and immunologist, who serves as the director of the US National Institute of Allergy and Infectious Diseases, on Monday also recommend mass vaccination to arrest the current spread of the deadly disease across India.

Right now, they should start getting as many people vaccinated as they possibly can, with both the vaccines that they developed themselves in India as well as supplies of vaccines that they may be able to procure from other suppliers, be that the United States, be that Russia whatever country is willing whenever companies are willing to supply vaccine, Fauci said.

However, getting someone “vaccinated now” does not solve today’s problem, he noted, adding that it helps prevent a problem several weeks from now.

The more immediate problem is how to care for and treat the thousands who are thronging overflowing hospitals across the country every day, in desperate need of oxygen and basic treatment.

It is quite obvious to everyone that the situation in India is extremely serious,” said Fauci, who is considered one of the world’s top infectious disease specialists.

When you have so many people getting infected the lack of the capability to take adequate care of everyone; when you have shortages of hospital beds and oxygen and shortages of supplies, that really becomes a very desperate situation. Which is the reason why we feel it’s important for the rest of the world to help out, to the extent they can, he said.

Fauci, who has been keeping a close tab on the worst health crisis in India, said there are certain things that India can do immediately, mid-term and long-term basis.

He recommended taking the help of the country’s armed forces to immediately build makeshift field hospitals.

“You will recall, last year when China had a very serious problem, they marshalled their resources to very, very rapidly build new hospitals, to be able to handle all the people who required hospitalisation,” he said.

Referring to media reports, he said there is a drastic shortage of hospital beds in India and people are being taken care of in makeshift arrangements.

“So, it would be possible, perhaps, with the help of your own military, to put up field hospitals as you would do as if in a wartime setting, so that people who are sick and require a hospital bed, will have a hospital bed,” he said.

He also underlined the need for a countrywide lockdown for a few weeks to arrest the spread of the virus.

A few days ago, I recommended and I believe at least parts of India are doing it, that you shut down the country in lockdown, he said.

He explained that when a lockdown in imposed, it definitely interferes with the dynamics of the viral outbreak and you could interfere with the continuity and the transmission of infection, the top immunologist noted, citing the experience gained by other countries.

Responding to a question whether the current surge in infections in India posed a threat to other countries, Fauci said, Well, I mean, obviously, when you have a massive amount of infection in one country there’s always a risk of infections.

You want to be careful that that doesn’t spread widely elsewhere, Fauci added.

“We are very sorry that India is going through this very, very difficult time. And that’s the reason why we know we are in great solidarity with them and trying to do whatever we can to help them,” Fauci said, referring to the Biden administration rushing medical equipment and life-saving drugs to India to help it fight the pandemic.

Demand for mobile vaccination drive for nomadic tribes in J&K