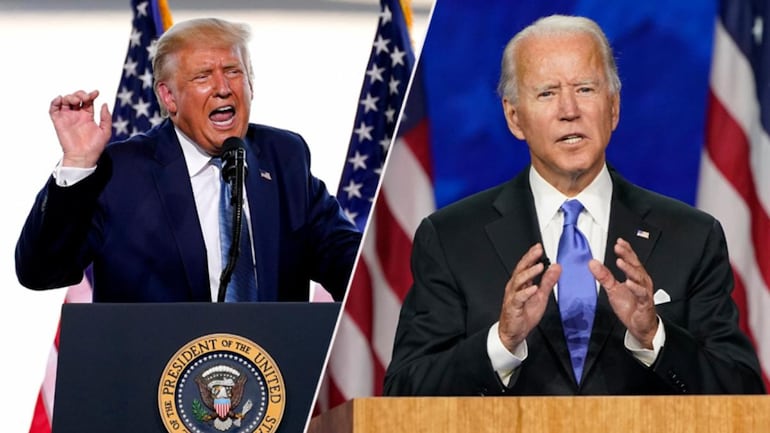 The Presidential elections in United States held on 3 November has not yet produced concrete results. The cumbersome procedure of electing the President has confused the world perhaps for the first time as to how the President is voted for and the elections results are announced. Unlike in India or in other democracies, there is no equivalent of an Election Commission in the United States; that could arbitrate and announce the electoral verdict. In the United States, it is the Supreme Court where the judges are nominated takes the final call.

At the time of writing we are getting unclear updates on electoral votes but Democratic Party rival Joe Biden seems to be ahead of President Donald Trump, while counting was on in a number of states. In the meanwhile, curiously, both candidates are claiming victory, Trump, on the basis of hope, and Biden on the margin he has secured so far. Trump has also threatened to take it to Supreme Court which will give a ruling on counting of the votes. Both accuse each other of assaulting democracy, disregarding popular mandate and diluting the spirit and process of elections.

It has happened before when election disputes have been taken to the Supreme Court. In 2000, the Democratic Party candidate Al Gore lost to George W. Bush in the Supreme Court and had conceded defeat. But this time around, there is a sharper and deeper polarisation of the electorate between the Conservative Whites and the rest. Observers find it the lowest point of American democracy which is marked by racism, autarky, isolationism and eccentric leadership. The so-called liberal and progressive Americans talk about reclaiming, “the soul of America” and “retrieving the American values”.

Amid the high drama of American elections, let us look at the impact of current elections on America, and its influence on the rest of the world, in particular, India. Why do we find it strange or incredible about what is happening in America? In electoral politics, winning the majority is the name of the game. The nature of constituting that majority defines the quality of one’s politics. If the majority is based on universally acknowledged values like equality, pluralism, dignity and solidarity then one can call it progressive or else it would be conservative , populist, racist, exclusivist and so on.

In politics, or events related to human beings who are ever so dynamic, one must recognise it first, acknowledge it, and then, if it is not desirable, change it. But it is quite unrealistic to dismiss a social political process without understanding it. This is the mistake made by observers across the world. Alternatively, if you refuse to recognise the reality lest we should embrace it, we have to rethink democracy itself. Shawn W. Rosenberg, a Professor of Political Science, Psychology and Social Behaviour in the University of California in a wonderful book ‘Democracy Devouring Itself: The Rise of the Incompetent Citizen and the Appeal of Right Wing Populism’ has explained how democracy is faltering and re-producing so-called negative social and political values.

In the light of the above premise, Donald Trump had cobbled up a majority in 2016 appealing to nativism, American first.  In electoral terms, is it illegitimate? There are many other leaders including the present leadership in India, doing the same by appealing to localism and consolidating  Hindu majority. As a matter of electoral strategy, one could perhaps ignore such sectarian and nationalist mobilisation, but if such logic is extrapolated to governance that is objectionable and is to be resisted. This is where Mahatma Gandhi’s principle of symbiotic relationship between means and ends come into play; noble ends can be met with equally noble means or ends justify the means. However, in practical life, one could separate the two. So American politics is not experiencing anything unique as such trends are sweeping the world.

It is true that un-statesmanlike utterances by Donald Trump and his eccentric behaviour have caused a great deal of unease and exasperation among his critics and supporters alike. I have said more than once in this column, how I was advised by a Trump supporter in the United States to evaluate the President, ‘by his actions, not statements’. Despite the tone and language, even his statements have a consistency, from an interview to Opra Winfrey in 1980s to his entering the White House in 2016. In videos and books authors have detailed the reasons for their support to Trump. The facts and figures on economy, security, America’s military engagement in the world and so on testify Trump’s accomplishments.

The impact on the world of a Trump-led or post-Trump America is not going to be much different. Biden’s language will be more temperate and his tactics more balanced. But America’s past generosity arising out of its super power status will not be evident anymore. It will continue to be cautious in its transactions with other powers. American politics and decision-making is dependent on several variables and institutions despite the pre-eminent role of the President. Hence, the continuity of policies pursued through institutions will hardly be disrupted. The style might change but the substance will remain the same.

What does it mean for India? Will Biden in White House water down the growing proximity between New Delhi and Washington? To start with, Prime Minister Modi’s open endorsement of Donald Trump in Howdy Modi rally was undiplomatic and left bad taste. New Delhi should build relationship with countries not individual leaders however popular they could be. Unlike in India, the institutions in western democracies are bigger than the individuals. That could be, interestingly, a saving grace for India. Biden took Harris as his Vice-President candidate despite a bitter nomination fight between them in the primaries. Obama, in the past, had appointed his rival Hilary Clinton as the Secretary of State. Therefore, it is certain that Biden will not carry any grudge against Narendra Modi and will act in the national interest of the United States.

It is rumoured that Biden’s son was involved in business with Chinese companies. That again may not influence Biden’s dealing with China. Trump has raised the pitch against China too high for Biden to back track. So the common agenda vis-à-vis China between India and the United States will continue the collaboration between New Delhi and Washington. Some Indian observers argue that Chinese unexpected aggression has pushed New Delhi into American tent or else it would have stayed away from Trump’s America. This argument does not hold.

The proximity between US and India has been growing since 1999 when Vajpayee was the Prime Minister, or even before during Narasimha Rao time. Rao was a pragmatic politician. Unlike Nehru family, he refused to be courted by Soviet leadership. The four foundational military agreements making India a practical ally of United States began to be signed much before the latest Chinese territorial incursion. Whatever happens in United States’ Presidential elections the lesions for India are primarily two.  Let us not take a moralistic position on American politics, and secondly, build and re-build the relationship in regard to issues, institutions and interest not personalise it.

Wasteful Nation: Right spend in question
Round The States
Comment