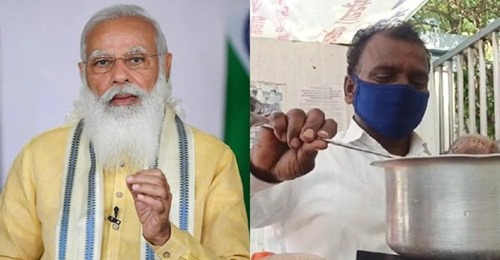 New Delhi:  We have grown accustomed to watching Prime Minister Narendra Modi in his new, customary long beard. However, one man in particular doesn’t seem to be a fan, or so it appears.

A tea vendor from Maharashtra’s Baramati has sent a money order of Rs 100 to PM Modi asking the latter to get his beard shaved, Lokmat reported.

Since the pandemic began, the unorganised sector has been adversely hit because of the covid-induced lockdown across the county. The problems have only mounted during the severe second wave leaving many without a source of income.

Upset over the regular struggles, Anil More, owner of a small tea stall had some advice for the Prime Minister.

“PM Modi has grown his beard. If he should increase something, it must be employment opportunities for the people of this country. Attempts must be made to accelerate vaccination for the population and there must be efforts to step up the existing medical facilities. The PM must make sure people are rid of their miseries that are caused by the last two lockdowns,” he was quoted as saying by The New Indian Express.

He further went on to add that Prime Minister’s position is the highest in the country and he has utmost respect and admiration for Narendra Modi. He said, without any malice intention, he is sending Rs 100 from his savings to PM Modi so he shaves his beard.

“I am sending Rs 100 for my savings to him so that he shaves his beard. He is the supreme leader and I don’t intend to hurt him. But the way in which the problems of the poor are growing by the day due to the pandemic, this is a way to draw his attention,” he said.

In a letter to the PM, More also urged him to extend financial assistance of Rs 5 lakh to families of those who have had a Covid death and Rs 30000 for families hit by the lockdown.