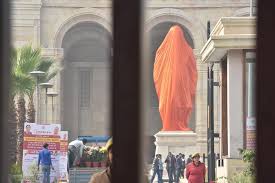 Preparations are underway at Lucknow’s Lok Bhawan where Prime Minister Narendra Modi is scheduled to unveil former prime minister Atal Bihari Vajpayee’s statue on his birth anniversary later today.PM Modi will arrive in Lucknow at 3 pm following which he will unveil Vajpayee’s bronze statue outside the Lok Bhawan. Subsequently, he will also lay the foundation stone for a proposed Atal Bihari Medical University.

Uttar Pradesh Chief Minister Yogi Adityanath and Governor Anandi Bien Patel will be attending the event along with other state ministers and leaders. The venue has been sanitised with the help of a sniffer dog and bomb detectors.

The event coincides with the birth anniversary of Atal Bihari Vajpayee, the co-founder of the Bharatiya Janata Party (BJP).Earlier in the day, Modi, President Ram Nath Kovind and other BJP leaders paid floral tributes to Vajpayee at the ‘Sadaiv Atal’ memorial in the national capital.

Apart from politics, Vajpayee was a prominent writer and has penned a number of poems. After resigning as the prime minister in 2004, the BJP stalwart retired from active politics owing to his feeble health.The veteran BJP leader passed away on August 16, 2018, at the All India Institute of Medical Science (AIIMS) in Delhi after prolonged illness.

December 25 is celebrated as ‘Good Governance Day’ in honour of Vajpayee.