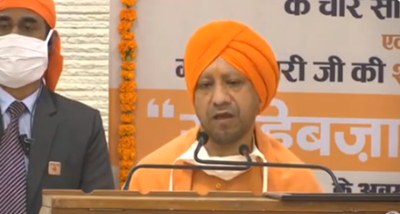 The Uttar Pradesh government has decided to include the history of Sikh gurus in the school curriculum in the state.

Chief Minister Yogi Adityanath also announced that 27th of December will be celebrated every year as Sahibzada Diwas in all schools of state.

The Chief Minister said this at a Gurbani Kirtan held at his residence on the occasion of ‘Sahibzada Diwas.

He said that it is a day to pay gratitude to the sons of the Guru and mother who martyred their lives for the motherland, country and religion.

The Chief Minister said that the Sikh society is known for its hard work. The Sikh gurus sacrificed their lives to defend the Hindu religion. The country will always remember this.

Metro services to reach over 25 cities by 2025, says PM Modi
Dry run for coronavirus vaccine to be held in four states
Comment