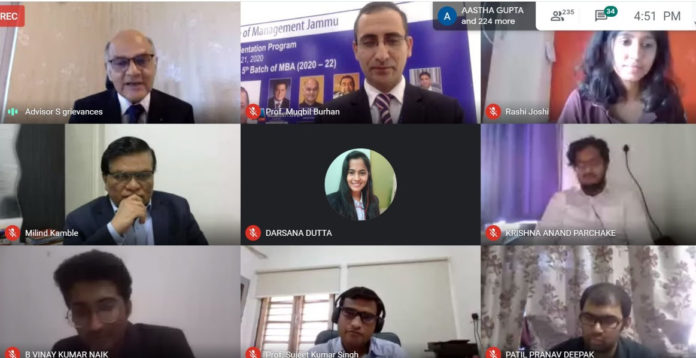 SRINAGAR, JULY 21:  Advisor to, Lieutenant Governor, K K Sharma, today said that Universities and Higher education institutions have a greater role and responsibility towards shaping nation’s future into a better world to live in.

The Advisor was speaking at the valedictory function of a 5 day orientation program of Indian Institute of Management (IIM), Jammu, which he attended through video conferencing from Srinagar.

Advisor Sharma said that India is witnessing huge transformation in several significant fields and our educational institutions must be quick on their feet to anticipate future trends as well as adapt, evolve and respond to any kind of disruptions. He said that it is heart-warming to note that IIM Jammu is according deep focus on developing ethical leaders and entrepreneurs that are not just committed to business and industry, but are also socially conscious towards their contribution in nation building and representing the country on a global platform.

“I wish to mention that IIM Jammu has great potential and a larger role to play in the newly formed Union Territory of Jammu and Kashmir as well as in the country as a whole and it is going to be one of the finest institutions globally”, the Advisor said .  The existence of an institute like IIM Jammu in our Union Territory holds an important role for our progress and growth, he maintained.

Advisor asserted that “Jammu is having almost all the major institutes of national importance. We now have IIT, IIM, AIIMs, IIIM and IIMC in Jammu and I am sure they all are going to play a big role in the progress of J&K”. He said that IIM Jammu is soon going to start its off site-campus in Srinagar which will also have an incubator and will initially focus on entrepreneurship and executive education.

Advisor said that the government has already promised all necessary support for setting up of the permanent campus in Srinagar. The Srinagar campus will give broad outreach to the institute and help J&K in achieving greater economic prosperity through capacity building and entrepreneurship development in the region, he added.

“I would encourage all of the young minds, to utilize skills and capabilities to become ‘employment generators’ and not ‘employment seekers’. Building infrastructure in remote areas of the country and developing all the sectors of the economy are the biggest challenges and their enormous responsibility rests on your shoulders as professional”, the Advisor exhorted upon the youth.

Pertinently, Indian Institute of Management, Jammu began the last day of its 5 day Orientation program for the 5th batch of MBA (2020-22) and the 1st batch of PhD (2020-24) with an online yoga session conducted by Vaijayanti Joshi. She performed different yoga aasanas with students and urged them to make Suryanamaskar as a part of their daily routine. She concluded the five day Yoga workshop by quoting, “My aim is to provide a holistic view of Yoga to management students which will help them in becoming responsible future leaders”.

The event was also attended by Sandip Das, Former MD & CEO, Reliance Jio who spoke on the topic ‘Leaders in These Times and Any Times’. The industry veteran explained the students about the importance of authenticity among the other leadership skills and advised students to be true to themselves.

Thereafter, a session was taken by Rajeev Krishnan, Former MD & CEO, SPAR Hypermarkets and Landmark Group on the topic ‘Emotional Quotient and the Digital Soul’.

Amit Ghosh, Joint Secretary, GOI, enlightened the students about the challenges faced in the revival of infrastructure in India. Starting with the Bharatmala Pariyojana, details of various others projects were shared. He also discussed some facts on Direct Employment.

Prof. B.S. Sahay, Director IIM Jammu, delivered impelling words on the “Role of Students” in branding IIM Jammu. He talked about the importance of participation and being inquisitive besides highlighting the importance of research.