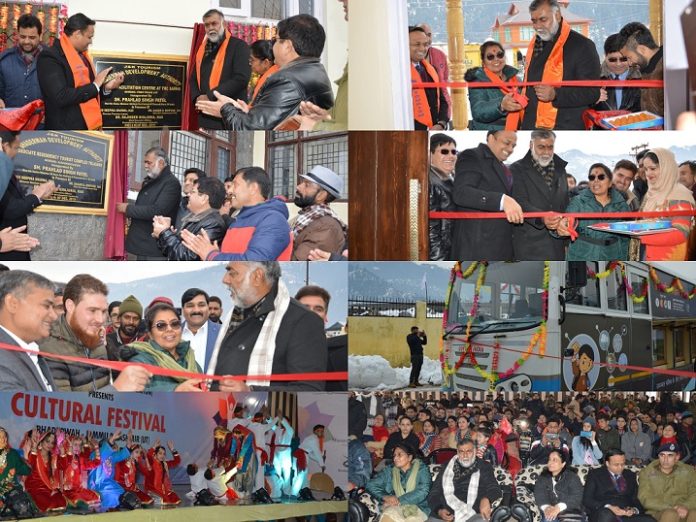 On the first day of his extensive visit to Jammu, Union Minister of State for Tourism & Culture, Prahlad Singh Patel, emphasized the need of collaborative efforts towards preservation and protection of historic Mubarak Mandi Heritage Complex.

The Union Minister along with Executive Director, Mubarak Mandi Jammu Heritage Society and Consultant of the Society took a round of the Heritage Complex and was briefed about the Comprehensive Conservation and Adaptive Re-use Master Plan for Mubarak Mandi Palaces Complex, Jammu.

The Minister visited the interior sections of the complex and the Dogra Art Museum as well where Superintending Archaeologist, Archaeological Survey of India, V.S. Rawat, explained him about  the ongoing conservation  and preservation works being executed by the ASI in the Complex.

The Minister stressed  the need for preserving the Mubarak Mandi Heritage Complex  as   it is a world class heritage site which has been  gifted to us by our forefathers.

The Minister took a round of the famous spots in the area and stressed the need for developing a Spiritual Circuit for preserving the religious and cultural legacy of the region.

Union Minister stressed for accelerating   the pace of restoration and conservation works on Akhnoor Fort and advised for further development of Jio Pota Ghat and its surrounding areas to facilitate the tourists.

Later, the Union Minister   convened a meeting  with  Advisors to Lieutenant Governor, K. K. Sharma and Farooq Khan, Principal Secretary Tourism, Navin K. Choudhary and officers of Tourism and Culture Department at  the Convention Centre, Canal Road, Jammu. He was briefed  about the ongoing projects and the activities undertaken by the Tourism and Culture Department in J&K.

The Union Minister assured full support to the department in its efforts towards development of tourism and culture in the UT of J&K.

On the second of his visit, Prahlad Singh Patel inaugurated important Tourism projects at Bhaderwah Town and its peripheries.

The Union Minister inaugurated Tourism Facilitation Centre near TRC Sarna and a newly constructed Associate Residency Tourist complex at Teligarh. The projects have been constructed by the Bhaderwah Development Authority (BDA).

He also inaugurated a mobile science exhibition on the occasion.

The Union Minister inspected the facilities at the newly constructed projects and expressed satisfaction on the quality of work.

Referring to huge tourism potential of Bhaderwah Valley, he asked the district administration to promote the area on national and global tourism map.”There is a need to identify more trekking routes, improve road connectivity for the   tourist destinations and provide best tourism infrastructure to attract high end tourists,” he asserted.

He also met with public deputations and listened to their grievances.

Later, the Union Minister inaugurated a mobile science exhibition put up inside a bus. This exhibition aims at developing scientific temper among the students and acquaint them with various measures that can be taken for harnessing clean and green energy.