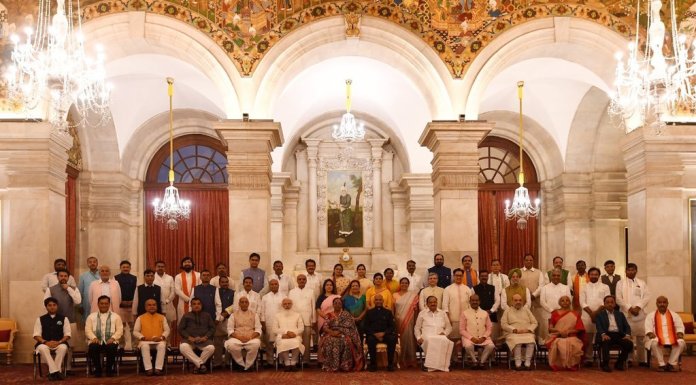 AIR Correspondent reports, with today’s expansion of the Council of Ministers, the Narendra Modi government has a record representation of OBC, SC and ST communities. 27 OBC Ministers including 5 with Cabinet rank, 12 ministers from scheduled caste communities and eight from scheduled tribes are now in the Union Council of Ministers. Women representation has also increased with the induction of new faces. Five leaders of the minority community are now ministers in the Modi government.

Besides, the Cabinet expansion also witnessed a fine balance of young and experienced leaders. In the expanded Council of Ministers, 14 ministers are below the age of 50 years including six cabinet ministers. There are 46 leaders with experience of being ministers in the Central Government and 23 who have been elected to the Parliament three or more times. Professionals with educational and functional experience have also found a place.

Prime Minister Narendra Modi has congratulated all the colleagues who have taken oath today and wished them the very best for their ministerial tenure. In a tweet, Mr Modi said, they will continue working to fulfil aspirations of the people and build a strong and prosperous India.