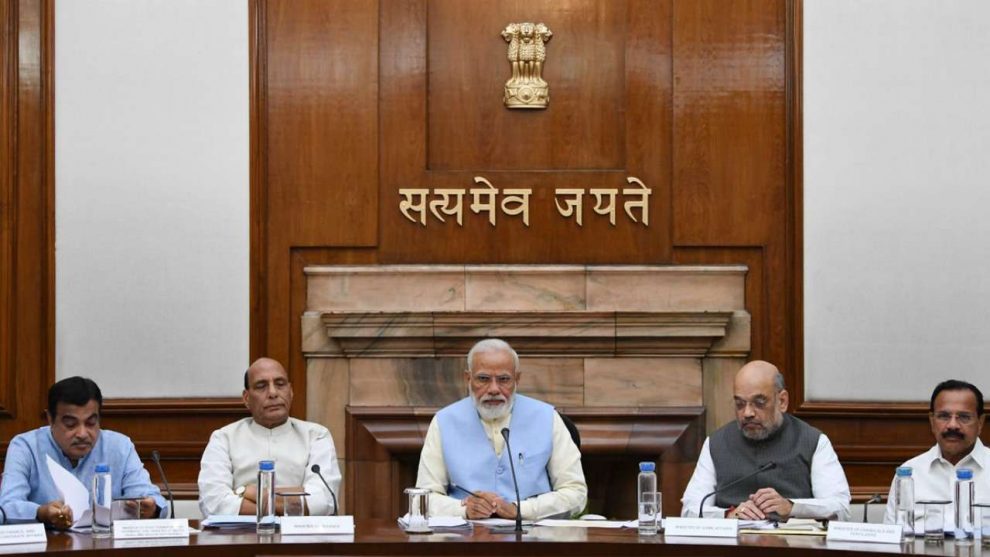 The Dispatch Staff
Add Comment
This will be the second direct Outreach of the Central Government with the people of Jammu and Kashmir after visit of 36 Union Ministers to the Union Territory from January 18-24 in 2020.

Jammu:  Nearly 70 Ministers in Narendra Modi’s Council of Ministry will start 9-week long Public Outreach Programme-II of Jammu and Kashmir with eight Ministers visiting the Union Territory every week beginning September 10 during which they will have direct interaction with the people, administration and representatives of the Panchayati Raj Institutions (PRIs) among others listing issues faced by them and addressing whichever is in their domain while forwarding rest in comprehensive reports to the Ministry of Home Affairs (MHA) and Prime Minister’s Office (PMO).

This will be the second direct Outreach of the Central Government with the people of Jammu and Kashmir after visit of 36 Union Ministers to the Union Territory from January 18-24 in 2020.

The Daily Excelsior reported quoting sources said that out of 78 Ministers in Modi’s Council of Ministry around 70 will be visiting Jammu and Kashmir including the senior Cabinet Ministers.

However, as of now, there has been no schedule of the Prime Minister’s visit to the Union Territory.

Union Minister of State in the Prime Minister’s Office (PMO) Dr Jitendra Singh, who is the lone Union Minister from erstwhile State of Jammu and Kashmir, is coordinating with the Union Home Ministry in finalizing schedule about visits of the Ministers to the Union Territory.

“The schedule is likely to be released in next few days,” they said.

As per tentative proposal, eight Ministers will visit the Union Territory every week—four each in Jammu and Kashmir divisions.

“The Outreach Programme will last at least nine weeks as around 70 Ministers will be touring J&K,” sources said, adding that senior Cabinet Ministers will also be part of the Programme but their visits will be finalized depending on their schedule. Some of the Ministers, who were inducted in the Council of Ministry in major reshuffle carried out by Prime Minister Narendra Modi in July this year, will be visiting Jammu and Kashmir for the first time after taking over the new responsibility.

“Tours of some of the Ministers will be area-specific,” they said, adding that Ministers for Agriculture will tour areas of farming while the Rural Development Department and Urban Development Department Ministers will be visiting rural and urban and semi-urban areas respectively. It will be endeavour of the Central Government to cover almost all tehsils if not blocks by the visiting Ministers so that people could directly raise their issues with them.

As per the sources, the Ministers on their return to New Delhi after visiting different parts of the Union Territory will submit their reports to the Ministry of Home Affairs and the Prime Minister’s Office just like 2020. The MHA and PMO had then forwarded issues raised by the people and pointed out by the Union Ministers in their reports to the Jammu and Kashmir for addressing them.

“Some of the issues which pertained to the Central Ministries were addressed by the Government of India while rest were referred to the J&K Government,” sources said.

In 2020, 36 Central Ministers had visited the Union Territory of Jammu and Kashmir from January 18-24 and toured several far off areas as well. They had submitted their recommendations to the MHA as well as PMO then and issues raised by the people were addressed by the Central and the UT Governments.

The Public Outreach-II was earlier schedule to take place in the months of July and August but was deferred because of the Monsoon session of Parliament followed by 75th Independence Day celebrations.

It may be mentioned here that during past few days, 13 Parliamentary Standing Committees (PSCs) comprising around 300 Members of Parliament (MPs) have visited the Union Territories of Jammu and Kashmir and Ladakh while around half a dozen more PSCs are on way to the two Union Territories.

Lok Sabha Speaker Om Birla was also on a week-long tour of Ladakh and Kashmir which concluded today while a number of Ministers have also visited Leh.