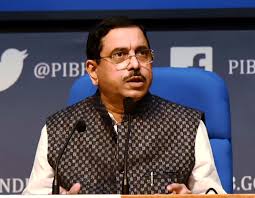 Parliamentary Affairs Minister Pralhad Joshi has said that the Budget Session of Parliament, which commenced yesterday will take up 38 items during the session. These include 33 Bills and five financial items. He assured that though the Session will mainly be devoted to the Financial Business relating to Union Budget for 2021-22 and discussion on the Motion of Thanks on President’s Address, essential Legislative and other Business will also be taken up during the Session.

Mr Joshi further informed that four Bills replacing Ordinances promulgated during the inter-session period are required to be enacted as Acts of Parliament within a period of six weeks from the reassembly of Parliament. These are – The Commission for Air Quality Management in National Capital Region and Adjoining Areas Bill, 2021, The Arbitration and Conciliation (Amendment) Bill, 202, The National Capital Territory of Delhi Laws (Special Provisions) Second (Amendment) Bill, 2021 and The Jammu and Kashmir Reorganisation (Amendment) Bill, 2021. He said that the Union Budget for 2021-22 will be presented to Lok Sabha on Monday at 11.00 A.M.