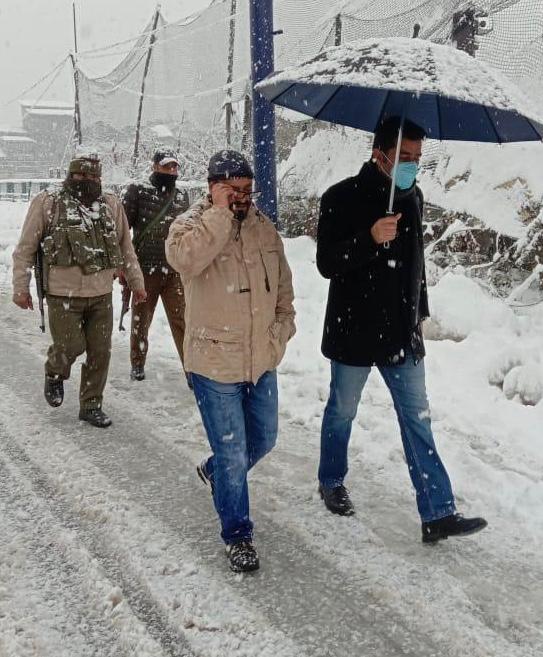 SRINAGAR, JANUARY 23: The entire fleet of machines at the disposal of Srinagar district administration was out on the ground Saturday as fresh snowfall was received and continued through the day in the district.

Prior deployment of machines – as per a comprehensive plan that had been chalked out – had been made to ensure prompt snow clearance in order to prevent disruptions in pedestrian and traffic movement.

Deputy Commissioner Srinagar Dr Shahid Iqbal Choudhary was monitoring snow clearance and other efforts through the day. He toured round the city to inspect response mechanism that had been pressed into service to ensure prompt restorations.

The snow-clearance operation was monitored in real-time through the day thanks to the GPS devices which were recently installed on all snow-clearance machines at the disposal of the district administration.

It is notable that last week the Srinagar administration fitted the entire fleet of 25 snow clearance machines of the Mechanical Engineering Department with geo-tracking devices to enable real-time monitoring of snow clearance.

The PWD and SMC were also involved in uninterrupted efforts to clear snow and help facilitate movement in and around the city. PWD had pressed hundreds of men into service for manual efforts required at various places to aid mechanical efforts.

As it was continuously snowing the focus of the administration was on easing traffic disruptions. The entire workforce of the Traffic department was out on the roads directing and managing traffic in order to minimise disruptions.

Bridges across the district were sprinkled with salt along with manual snow-clearance efforts to facilitate movement of traffic.