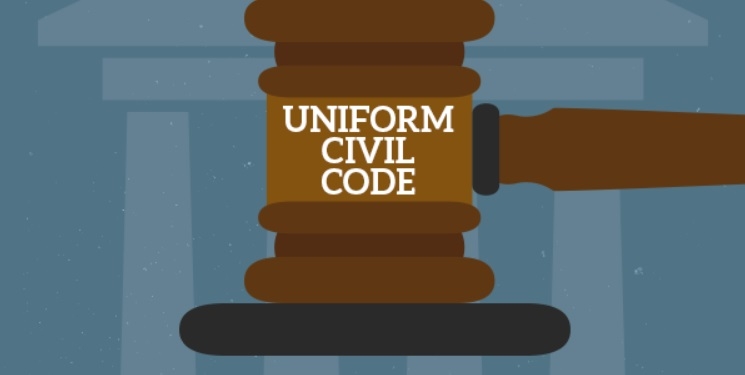 Secularism has always been the Hindutva Brigade’s bug bear and political untouchability the Congress catch word. Whereby, Ram and Rahim have been reduced to election cut-outs. They might have to take a backseat with the Delhi High Court putting the spotlight back on the contentious Uniform Civil Code (UCC) of knitting India’s diverse social fabric into one nation.

In its order last week disposing of a case whether marriage between parties who belonged to the Meena community were excluded from the ambit of the Hindu Marriage Act 1955, it stated, “Modern Indian society is gradually becoming homogenous, the traditional barriers of religion, community and caste are slowly dissipating, the hope expressed in Article 44 of the Constitution that the State shall secure for its citizens Uniform Civil Code ought not to remain a mere hope.” Indian youth belonging to various communities, tribes, castes or religions need not be forced to struggle with issues arising due to conflicts in various personal laws in relation to marriage and divorce.

The Court ruling is music to the Modi Sarkar as the BJP-RSS as having fulfilled two of the three-long-standing items on its manifesto since 1998 — construction of a Ram temple in Ayodhya and abrogation of Article 370 in J&K — has just one item left Uniform Civil Code (UCC).

Both Modi and Amit Shah have been pluming for it as they believe no country should have any law based on religion and there should be a single law for all the citizens. There cannot be gender equality till such time India adopts the Code which protects the rights of all women. A consensus among all people has to emerge which address their misgivings and concerns before the Code can be enacted.

Added a senior Minister, “decades-old problems festering for over 70 years cannot be solved by procrastination, in a ‘fits and start approach’ or in installments, there is a need to address the “delusion” that some people have “encouraged” that UCC is against the rituals and core practices of any religion. “It is a scientific and modern way of achieving the goals of gender justice which would help the cause of national integration by removing the contradictions based on ideology.”

But this is vehemently opposed by Opposition Parties who feel the UCC would interfere with the right of religious freedom and in personal laws of religious groups unless the religious groups are prepared for change, (sic). It is a ‘minority versus majority’ issue and the Hindutva Brigade’s policy for Muslims living in India. Secularism is in danger under Modi Raj, they yell.

The All India Muslim Personal Law Board too has expressed its reservations, stating India has a multi-cultural and multi-religious society and each group has the Constitutional right to maintain its identity. The UCC is a threat to the diversity of India, it avers.

Arguably, what is it about the Code that makes the political tribe other than the Hindutva Brigade see red? Article 44 simply states: The State shall endeavour to secure for the citizens a uniform civil code throughout the territory of India”. Bluntly, the Article simply spells out that there is no necessary connection between religious and personal law in a civilized society.

Raising a moot point: Why should a common civil code be viewed as encroaching on the right of religious freedom? Or being anti-minority? If Hindu personal law can be modernized and a traditional Christian custom struck down as unconstitutional, why should Muslim personal law be treated as being sacred to the secular cause?

Alas, over the years deliberate distortions of religion to suit narrow personal and political ends had vitiated the country, which shamelessly, has everything to do with vote-bank politics. All deliberately ignore and obfuscate a crucial fact that Ambedkar advocated “optional” common civil code.

During a debate in the Constituent Assembly on Article 35 (now 44) on November 3, 1948 when three Muslim members opposed the Article as it would interfere with their right to follow their own personal law, Babasaheb made two observations.  One, the Muslim Personal Law was not immutable and uniform throughout India, contrary to what had been stated in the amendments (moved by the Muslims members).

Two, the Article merely proposes that the State shall endeavour to secure a civil code for its citizens, not that after the code is framed States shall enforce it upon all merely because they are citizens. It is possible that a future Parliament might make a provision in the initial stage of the Code being purely voluntary.

Over the years the need for UCC has been reiterated by the Supreme Court times out of number including the 1985 Shah Bano case but they totaled zilch. Two years ago a Private Member’s Bill on the Code was introduced by a BJP MP in the Rajya Sabha but was stalled by the Opposition on the grounds that it could lead to communal tensions at a time when protests were being staged against the Citizenship (Amendment) Act.

Regrettably, in today’s politico-social reality Ambedkar’s sound advice is ignored and dismissed as a utopian hypothesis and Article 44 has remained a dead letter. As things stand both Hindus and Muslims have lost sight of the essentials of their respective religions and are largely misled by bigots and fundamentalists. Worse, even the educated are speaking the language barely distinguishable from that of Hindu-Muslim fundamentalists. Their stock answer to every critique: Religion is in danger.

Surprisingly, liberal Muslims have chosen to remain silent on the subject. Are they not aware that many Islamic countries have codified and reformed the Muslim Personal Law to check its abuse?  Polygamy has been banned in Syria, Tunisia, Morocco, Iran and even Pakistan. Should they not support Ambedkar’s middle path of a voluntary civil code. All this raises the question: Should the State discriminate by caste and religion?  Never, in a secular State.

Alas, successive Governments have failed to draw a distinction between politics, caste and religion. Forgetting, there is no mysticism in the State’s secular character. It is neither pro or anti God and is expected to treat all religions and people alike ensuring that no one is discriminated against on the ground of religion.

Where do we go from here? It all depends on whether the Government is willing to get rid of its excess baggage of isms. The Court has shown the way once more. The Government can now fire the gun from its shoulder.

India and its secularism deserve a voluntary common civil code for gradual acceptance without further delay as it will help the cause of national integration by removing disparate loyalties in laws which have conflicting ideologies.

Enlightened opinion among the Muslims will then have a choice; be liberal and progressive or remain obscurantist and backward. Goa has had a common civil code for long, thanks to its Portuguese rulers. Importantly, it has been willingly accepted by all, creating a Goan identity.

Ultimately, no one community should be allowed the veto or block progressive legislation.  Especially if it is voluntary and does not seek to impose any view or way of life on any one arbitrarily.  Enough needs to be viewed as enough and action taken forthwith to implement Article 44.  What gives? —- INFA