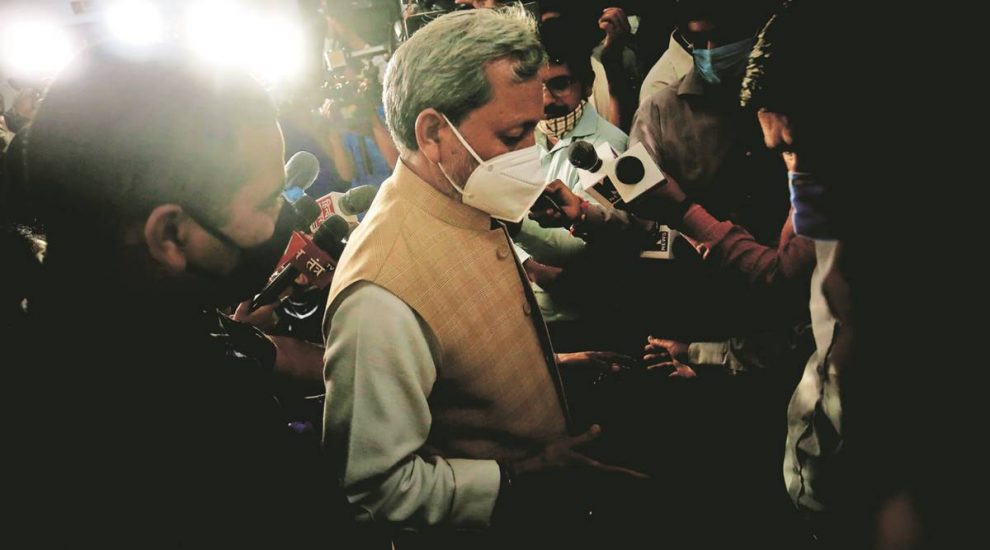 Tirath Singh Rawat had to tender his resignation due to uncertainty over bypolls in Uttarakhand, said state BJP chief Madan Kaushik.

Rawat had to be elected to the state assembly within six months.

Saying that the Election Commission had no issue with conducting polls, but due to COVID-19, it could not materialize, Kaushik hinted that a sitting MLA would fill the top post.

Resignation was the only option: Madan Kaushik

In such circumstances, the resignation was the only option, he added.

Meanwhile, Union Minister Narendra Singh Tomar will reach Dehraduna today, after which the legislature meet will take place at 3 pm.

We will elect the CM. Post that, we will meet the Governor for government formation. The CM may be among the MLAs,” said Kaushik.

After resigning, Tirath Singh Rawat had said that the decision was right given the constitutional crisis in the state.

Uttarakhand likely to get its new CM today

“I have submitted my resignation to Governor. Given the constitutional crisis, I felt it was right for me to resign. I am thankful to the central leadership and Prime Minister Narendra Modi for every opportunity they have given to me so far,” Rawat said.

The resignation came less than four months after he took over as Chief Minister on March 10 this year, replacing Trivendra Singh Rawat.

With this, the state will get its third chief minister in nearly four months.

As per the reports, the names of Trivendra Singh Rawat, Chaubattakhal MLA and Cabinet Minister Satpal Maharaj and Shrinanagar MLA Dhan Singh Rawat have been doing the rounds as probable candidates for the top post.

A section of BJP leaders in the state has recommended Trivendra Singh Rawat’s name as they believe that instead of gambling on a new face, reinstating the former CM would be a safe bet given his experience of being at the helm.