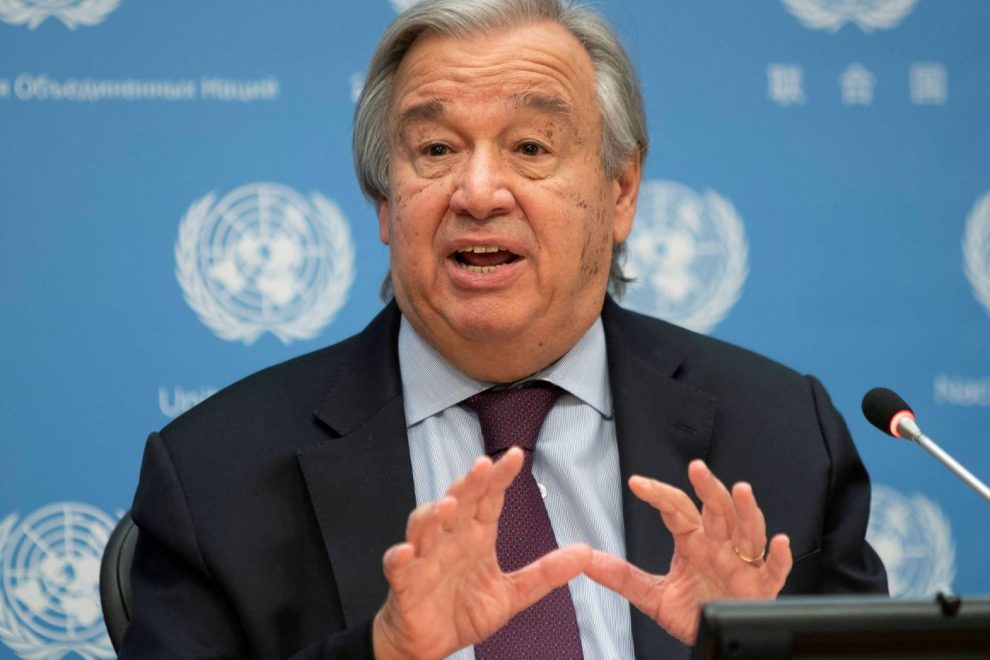 BARCELONA: Rich nations are “lagging badly” on a longstanding pledge to channel $100 billion a year in funding, from 2020 onwards, to help poorer countries develop cleanly and adapt to the worsening impacts of climate change, the U.N. chief said on Saturday.

Antonio Guterres told journalists, on the sidelines of a virtual “Climate Ambition Summit” to mark the fifth anniversary of the Paris Agreement, that a new report by climate finance experts estimated the promise would not be met this year.

Nor had donors responded adequately to the COVID-19 financial crisis to provide cash-strapped developing countries with liquidity and debt relief, he noted.

“There is a clear need to increase both forms of finance – and they should be inter-linked,” he said, calling for the pandemic recovery to be climate-friendly.

Barbados Prime Minister Mia Mottley said the COVID-19 crisis was consuming resources that had been intended for emissions reduction projects.

In a best-case scenario, she noted, her Caribbean island nation aimed to eliminate fossil fuels by 2030 through an “energy revolution” that would put solar panels on roofs and electric vehicles in garages.

In 2009, wealthy governments agreed to increase climate finance for vulnerable countries to $100 billion annually by 2020, and under the Paris Agreement they said they would negotiate a yet-higher amount that would kick in from 2025.

“Our collective goal must be to surpass the $100-billion-dollar-a-year target in 2021 and to scale up international public finance in the period after,” U.N. Secretary-General Guterres said in a speech opening the summit.

Many developing-nation leaders, including from the Maldives and Kenya, told Saturday’s event they would need more financial support to achieve new, stronger climate plans to cut emissions and protect their people from wilder weather and rising seas.

Kenya’s president said losses caused by the impacts of climate change in the East African nation – from droughts and torrential rains to ecosystem destruction – could add up to as much as 3% of gross domestic product per year.

Kenya would require about $62 million between 2020 and 2030 to implement its updated climate action plan, with about two-thirds of that for adaptation, he said.

The vast majority would have to come from the international community, he said – as is the case for many other poor nations.

Guterres, pointing to recent storm-caused floods in Central America as one example, said it was clear support for adaptation needed to be increased “to allow those countries to build the resilience that is necessary for their communities to resist the already inevitable impacts of climate change”.

He also noted that only about 20% of the $79 billion in climate finance raised by wealthy governments in 2018 was earmarked for efforts to adapt to climate change, and said that share should be increased.

“We need a breakthrough on adaptation and resilience,” he said, noting that this was especially urgent for small island developing states, “which face an existential threat”.

“Adaptation must not be the forgotten component of climate action,” he added.

German Chancellor Angela Merkel told the summit her government would initiate an international process to raise more climate finance for the post-2020 period.

Japan reiterated an earlier pledge to double its contribution to the Green Climate Fund, which assists developing nations, to a total of $3 billion.

France said it would maintain its level of climate finance in the coming years at about 6 billion euros, as in 2019, allocating about one-third of that to adaptation.

Tim Gore, head of climate policy at anti-poverty charity Oxfam, said the summit had been “all but silent on the question of new funds to lower-income countries to help them adapt to climate change and decarbonise their economies”.

He singled out France for not boosting its finance further.

“Communities in developing countries deserve better and need more,” he added in a statement.

During the summit, Bhutan’s prime minister Lotay Tshering noted that at least 19 of the world’s 46 least-developed countries planned to meet a Paris Agreement deadline to submit a stronger national climate action plan by the end of this year.

“We are counting on the support of the international community to help implement these plans,” he said. “Because of a lack of resources and technical expertise we cannot do much and (these plans) would remain a mere vision on paper.”

Britain challenged other countries to double their climate finance in the coming five years, as it will do, to “make the $100 billion a reality”, adding this was crucial to build trust for next year’s delayed climate negotiations in Glasgow.

“We must deliver for those at the frontline of climate change,” said Alok Sharma, Britain’s minister leading the talks.

The summit also saw the launch of a U.N.-backed “Race to Resilience” initiative that aims to help 4 billion people from groups and communities vulnerable to climate risks become better able to withstand the impacts of climate change by 2030.

It aims to build a coalition of business and civil society groups to transform urban slums into healthy, clean and safe cities, equip smallholder farmers to adapt and thrive, and protect coastal homes and businesses against climate shocks.