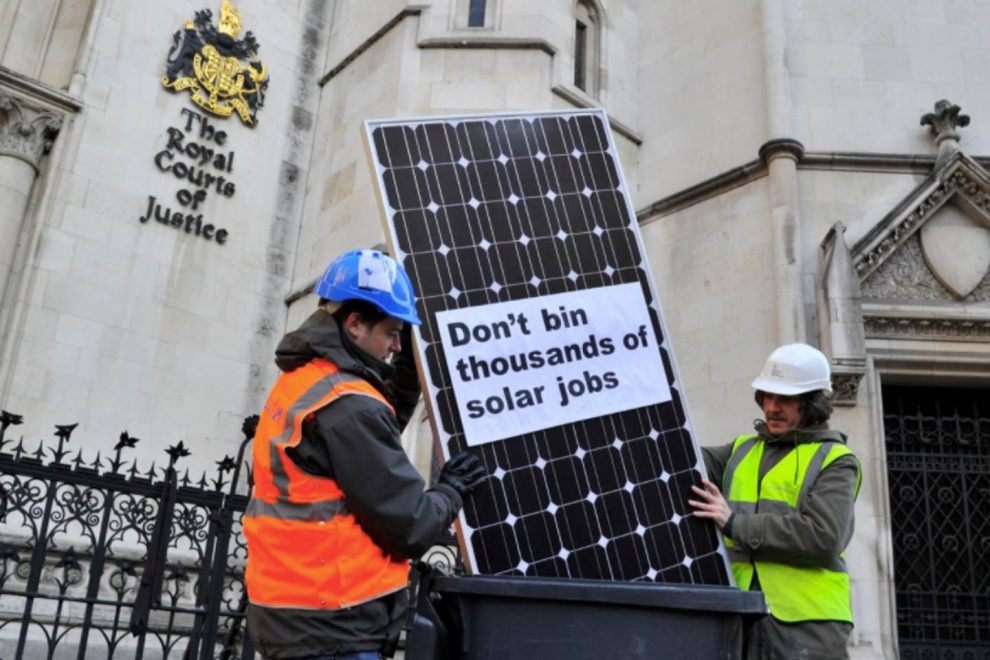 Prime Minister Boris Johnson late on Tuesday laid out a 10-point plan for a “green industrial revolution”, which he said would create up to a quarter of a million jobs through measures such as expanding building retrofits and offshore wind power.

The plan – which opposition Labour Party critics dismissed as not ambitious enough to reach Britain’s 2050 net-zero target – also included a ban on sales of combustion engine cars by 2030, as well as support for hydrogen and nuclear power.

But John Gummer, chair of the Committee on Climate Change, which advises the government, said the plan could bring benefits including “improved health, a stronger economy (and) a boost to UK jobs”.

The pandemic could lead to the loss of at least 2 million jobs in Britain – but more than half of those could be made up by boosting green employment, from home retrofitting to clean energy, said Hannah Martin, co-executive director of the non-profit Green New Deal UK, at a London Climate Action Week event.

With the right training programmes to develop new skills and other key government investments, such a shift could create more stable, future-proof jobs and help reduce inequalities, she and others told the online discussion on Tuesday.

In addressing both the pandemic slowdown and risks from planetary heating, “we have to talk about inequality as much as we talk about climate change”, said Martin, whose group seeks to reshape British economic priorities.

But that could be doubled in size by 2030, she said, with investment into things like improving digital access for all Londoners, expanding clean transport, spurring low-carbon business startups and retrofitting leaky, energy-sapping homes.

Public support for such climate-friendly policies appears to be growing, backers say.

An online poll published on Tuesday by London Councils, which represents Greater London’s governments, showed 82% of residents were “concerned” about climate change, with over half personally affected by problems such as heatwaves or flooding.

Younger people, aged 25-44, were most likely to say they were affected, as were people from Black and other minority communities, the poll of 1,000 “representative” Londoners found.

Among such groups, and more broadly, there is “a strong public willingness not to go back to before, but to build something better” during the coronavirus recovery, said Miatta Fahnbulleh, CEO of the London-based New Economics Foundation.

Until now, the scale of climate change threats has been “quite hard for people to imagine”, she added.

But the COVID-19 pandemic has given a sense of how quickly a threat can emerge and “a taste of what it will feel like when we are in the eye of the climate and nature crisis”, she said.

That has opened up more political space to think about fundamentally reshaping the British economy to help people and the planet, and using pandemic stimulus to that end, she said.

“We have to transform the economy and do this in a way that works for the majority of people,” including by creating new jobs, Fahnbulleh said during the online event.

To achieve the needed shifts and its own net-zero goal, the government should commit a minimum of 2% of GDP, building up to 5% of GDP, to bootstrap and drive climate-smart shifts that also address underlying social problems, she said.

That could fund everything from major job training and reskilling programmes to reforestation, she said.

“The government is going to have to spend its way out of this recession… It feels like an absolute no-brainer it should make this green,” she added.

Critics questioning whether the country can afford high levels of climate spending should take a hard look at the rising costs of not cutting carbon emissions, from worsening extreme weather to more precarious global food security, she said.

But “in return for consent to the scale of change, there has to be a good deal for public”, she emphasised, whether in the form of warmer homes, less pollution or more decent jobs.

Britain to ban new petrol cars by 2030 on road to net zero emissions
Indian Navy: Time to expand the geographical scope of mission based deployments
Comment