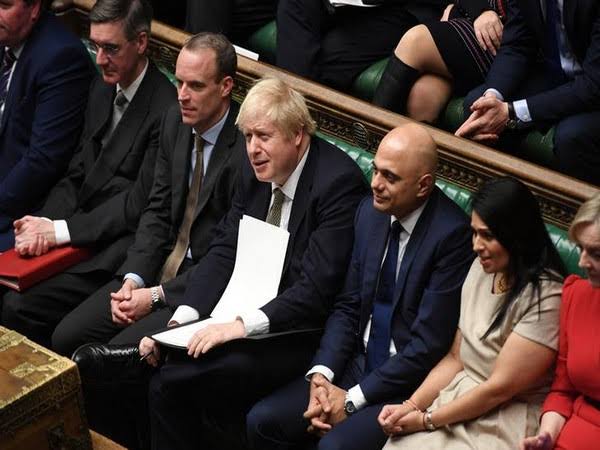 British lawmakers on Friday approved Prime Minister Boris Johnson’s Brexit deal in a landmark moment after three years of political bickering that sets the United Kingdom firmly on course to leave the European Union next month.
Johnson’s withdrawal agreement sailed through its first obstacle in the House of Commons on a mostly partisan vote, eight days after the Conservative leader grabbed an unexpected majority in the general election on a simple promise to ‘get Brexit done,’ CNN reported. The major development signifies that the UK will split from the block on January 31, when a transition period kicks in that will give both sides 11 months to agree on their future relationship.
The vote is a significant achievement that had eluded Johnson’s predecessor Theresa May on three occasions.
But the real work begins now for Johnson, who hardened his bill after the election to rule out extending the transition phase. He now has just a year to avoid a de facto no-deal divorce with the bloc.
“Now is the moment to come together and write a new and exciting chapter in our national story, to forge a new partnership with our European friends, to stand tall in the world,” Johnson said in Parliament on Friday, shortly before the Parliamentarians passed the bill by 358 votes to 234.
“The Bill ensures that the implementation period must end on 31st of December next year with no possibility of an extension,” he said, adding a trade deal would include “no alignment on EU rules.”
He also stated that the UK will crackdown on unskilled immigration, with a new points-based system.
Beleaguered Labour leader Jeremy Corbyn, still in his post despite suffering a humiliating electoral defeat to Johnson last week, said that the deal risks “ripping our communities apart, selling out our public services or sacrificing hundreds of thousands of jobs in the process.”
Johnson’s plan, agreed last October after months of frosty stand-offs with European leaders, replaces May’s Northern Irish backstop mechanism with a de facto customs border in the Irish Sea between Northern Ireland and the rest of the UK.