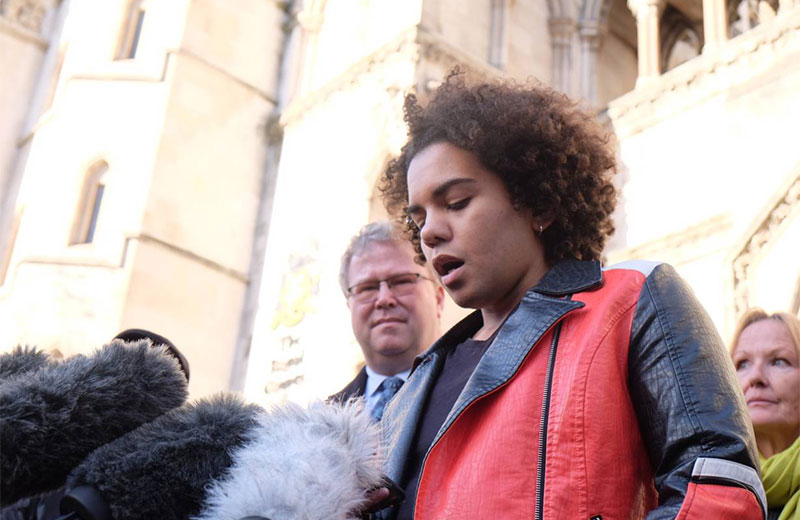 LONDON: Children aged under 16 will need court approval in England and Wales to access puberty blockers after a landmark ruling on Tuesday amid a global debate about the age at which a child can choose to transition gender.

Three High Court judges said it was “highly unlikely” that a child of 13 or under was “competent to give consent” to puberty blockers, and it was “doubtful” that 14- and 15-year olds could “weigh the long-term risks and consequences”.

Following the ruling, the National Health Service (NHS) England updated its guidelines to state that a court order must be sought for any new referral for such medication.

But the Tavistock and Portman NHS Foundation Trust, which runs England’s only youth gender identity clinic, vowed to appeal, setting the stage for a Supreme Court showdown.

Keira Bell, 23, brought the action against the Tavistock and Portman NHS Foundation Trust after regretting taking puberty blockers at the age of 16 that she feared may have damaged her ability to have children.

Bell, who “detransitioned” in her early 20s and now lives as a woman, had argued for puberty blockers to only be prescribed for under-18s with a court order.

The judges said 16 and 17-year-olds were presumed to be able to consent to medical treatment, but doctors may want to seek court orders before prescribing them puberty blockers due to the “experimental” nature of the treatment.

“I’m delighted at the judgment of the court today, a judgment that will protect vulnerable people. I wish it had been made for me before I embarked on the devastating experiment of puberty blockers,” she told reporters outside the court.

Bell’s lawyer, Paul Conrathe, said the decision “opens the floodgates for expensive clinical negligence claims” and called on the government to launch a public inquiry.

“The Tavistock have immediately suspended new referrals for puberty blockers and cross-sex hormones for the under 16s, which in future will only be permitted where a court specifically authorises it,” an NHS England spokesperson said by email.

The Tavistock had argued it would be an intrusion on a young person’s autonomy to restrict access to the drugs and said the outcome was “likely to cause anxiety for patients and their families”.

A spokeswoman confirmed the Trust was in talks with lawyers

Previously in Britain under a 1985 court ruling, children under the age of 16 could consent to medical treatment if they were deemed to understand and fully appreciate the implications, in what is known as the Gillick competence test.

Jolyon Maugham, a lawyer and director of the Good Law Project, a legal nonprofit that has worked on trans rights cases, said the new ruling could push families into taking children abroad for treatment.

“The practical effect of the judgment will be that puberty blockers will very rarely be prescribed to those under 16,” Maugham said on Twitter.

The mother of a trans 14-year-old, who has filed legal action over waiting times at the Tavistock gender clinic, described it as a “pretty devastating day”.

“There’s so much evidence that people don’t understand what it means to be trans … It’s not a choice,” she told the Thomson Reuters Foundation, asking not to be named to protect her child’s identity.

The ruling comes as rising numbers of adolescents globally seek to change gender, dividing those who fear doctors are too hasty in prescribing puberty blockers and cross-sex hormones and those worried about access to medication they deem life-saving.

The Tavistock has released figures showing a nearly 30-fold rise in child referrals to the clinic in the past decade, to about 2,560 last year.

Courts and lawmakers from Canada and the United States to Mexico and Brazil are weighing parental rights and the age at which someone can make medical decisions.

Trans rights campaigners have voiced concerns that the inability to access treatment will harm adolescents with gender dysphoria.

It described them as “fully reversible” but acknowledged concerns about possible impacts on bone development and height.