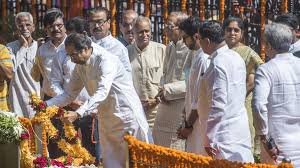 Maharashtra Chief Minister Uddhav Thackeray, along with his family, visited the memorial of Balasaheb Bal Thackeray on Tuesday to pay tribute to the former Shiv Sena leader on his eighth death anniversary.
Thackeray, son of the late Shiv Sena’s founder, was accompanied by wife Rashmi and sons Aditya and Tejas. All of them offered flowers and bowed down to pay homage at Balasaheb Thackeray Smriti Sthal in Mumbai’s Shivaji Park.

The memorial, situated in Mumbai’s Dadar area, is at a spot where Balasaheb Thackeray was cremated. The park was decorated with marigold flowers as Shiv Sainiks flocked to pay tribute to their founder-patriarch.
Born on 23 January 1926, Balasaheb left his job as a cartoonist in a daily newspaper ‘Free Press Journal’ in 1960 founded Shiv Sena on 19 June 1966 to advocate for the interest of Marathis or the people of Maharashtra.
He passed away on 17 November 2012 after suffering a cardiac arrest at the age of 86.