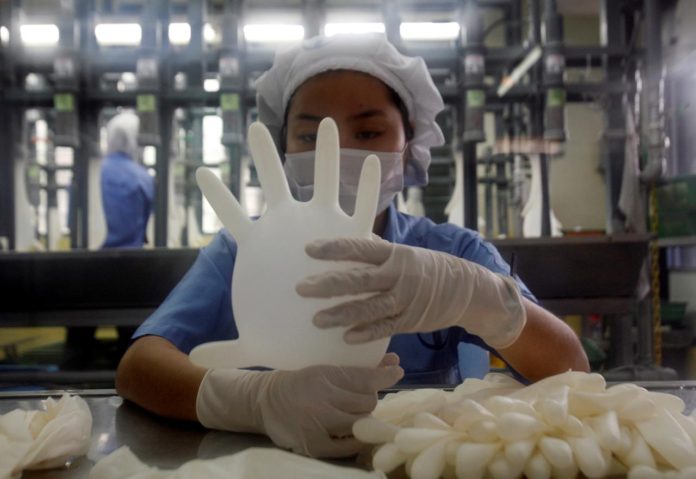 KUALA LUMPUR: Malaysia’s medical glove industry was under pressure to crack down on labour abuses on Thursday after the United States blocked imports from the world’s largest manufacturer, with demand for the product surging due to the coronavirus pandemic.

The U.S. Customs and Border Protection said it had placed a detention order on imports of products made by subsidiaries of Malaysia’s Top Glove, “based on reasonable evidence of forced labour in the manufacturing process”.

Top Glove said it was seeking details on the order, which it said may be related to recruitment fees paid by migrant workers to employment agents.

A similar order was imposed on another Malaysian glove maker, WRP Asia Pacific, last year but was lifted in March after remedial action was taken.

The Thomson Reuters Foundation first reported in 2018 that migrant workers at Top Glove were working long hours to pay off debts, some up to 20,000 Malaysian ringgit ($4,700), taken on to pay the agents that secured them their jobs.

But labour rights activists said the industry needed to do more to protect migrant workers and investors had a duty to sell shares in companies that allowed them to be exploited.

“The action by U.S. authorities is timely,” said Alex Ong, coordinator at Migrant Care, which campaigns for migrant workers in Malaysia.

“Billions of gloves are manufactured and used to save lives, yet these gloves are produced by the blood shed through exploitation.”

“It is equally important for fund managers and investors to unload their holding if companies (are using) profitability model that leverages on exploitations,” said Ong.

It was the second such action in less than a year against a medical glove manufacturer in Malaysia, which makes two out of every three pairs.

Top Glove, which has 19,000 employees, mostly migrant workers from countries including Nepal and Bangladesh, has said it will cut ties with unethical agents.

On Thursday it said it had been bearing all recruitment fees since January 2019, but it was still working to reimburse workers who paid fees to agents prior to that.

Top Glove said it is aiming for a “speedy resolution” on the U.S. order within two weeks.

Malaysia’s Human Resources Ministry did not respond to a request seeking comment.

From factories to construction sites and plantations, Malaysia relies heavily on millions of foreign but debt bondage is common among labourers according to rights groups.

Leong declined to give details on the scheme, but workers who are entitled to the reimbursement said some 1,600 workers will each get about 4,500 Malaysian ringgit.

“I’m happy to get back the money,” said Bikesh Rai, 35, a Nepali worker who spent $830 to secure a job at WRP nine years ago. He received the first payment last month.

“This is the amount I had forgotten and did not even expect to get back,” added Rai, who is from a small village in Nepal’s eastern plains.

“Debt bondage is intensified by many businesses offering loans to workers in the crisis as a form of support,” she said.