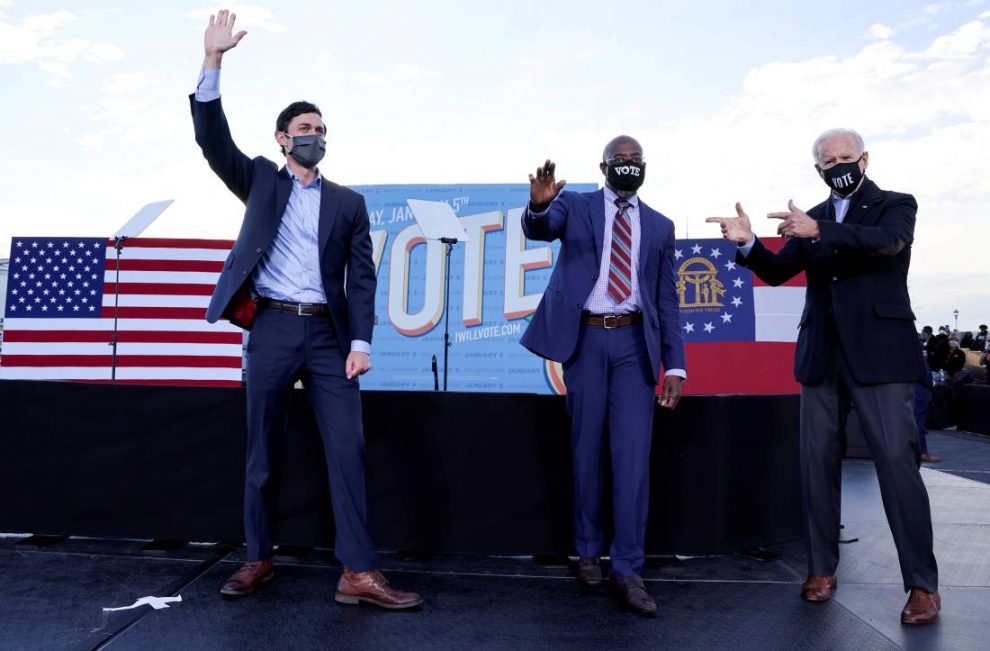 NEW YORK: Democrats won one U.S. Senate race in Georgia on Wednesday and took the lead in a second, moving closer to control of the United States’ bicameral Congress and the ability to advance President-elect Joe Biden’s pro-LGBT+ rights agenda.

Biden has promised to make passing the LGBT+ rights legislation known as the Equality Act a top priority, hoping to sign what would be a landmark civil rights law.

A final result of the runoff election – necessary because no candidate won more than 50% of the vote on Nov. 3 – is expected later on Wednesday.

If Democrats win both contests, the Senate will be split 50-50 with the Republican party, giving the tie-breaking vote to Democrat Vice President-elect Kamala Harris.

But if Republicans win the second contest, they will retain a slim majority in the chamber and can block Biden’s legislative goals, including several favouring the LGBT+ community.

“These two Senate runoff races in Georgia will be defining for the LGBTQ community and whether or not our rights are moved forward in Congress,” she told the Thomson Reuters Foundation.

Here is what the outcome could mean for LGBT+ rights:

Without full control of Congress, advocates say it is unlikely that Biden will be able to push through the pro-LGBT+ rights legislation known as the Equality Act.

LGBT+ people in 21 states, mostly headed by Democratic governors, already have anti-bias protections. Biden vowed in October to pass the law, which has struggled to pass Congress.

In 2019, the Democratic-led House of Representatives passed the bill, but it then stalled in the Republican-led Senate.

“Chances that a Republican-controlled Senate will all of a sudden decide to change their minds on this are very, very limited,” said Gabriele Magni, a professor of political science at Loyola Marymount University in Los Angeles.

“They had the chance and they decided not to do it.”

U.S. President Donald Trump’s administration objected to the Equality Act, saying it “opposes discrimination of any kind,” but the bill would “undermine parental and conscience rights.”

The Trump campaign pointed out that Trump was the first Republican presidential nominee to mention LGBT+ rights in his 2016 acceptance speech and had appointed LGBT+ people to U.S. courts and his cabinet.

Trans rights, hotly debated in the United States and around the world as to whether they encroach upon those of women, have been raised on several occasions during the Georgia run-offs.

U.S. lawmakers have sparred over healthcare protections for trans Americans and sex changes on birth certificates, as well as including trans girls and women in school and higher sports.

In September, Georgia’s outgoing Republican Senator Kelly Loeffler proposed the Protection of Women and Girls in Sports Act, designed to withhold funding from schools that allowed trans girls to compete on sports teams according to their gender identity.

Democrat challengers Jon Ossoff and Raphael Warnock have been vocal on the campaign trail about enhancing trans rights, with Ossoff telling a virtual town hall in June that he would address the violence faced by many trans people in the country.

LGBT+ activists are calling on the incoming Biden administration to pass a federal ban on a controversial treatment known as conversion therapy, which aims to change people’s sexual orientation or gender identity.

Conversion therapy is currently banned for minors in 20 U.S. states and the District of Columbia, and there are mounting efforts globally to outlaw the practice, with Britain, Israel and Mexico among those mulling bans.

Nearly 700,000 Americans have undergone conversion therapy, half when under 18, according to UCLA’s Williams Institute, which can range from counseling and “praying away the gay” to electric shocks.

Conservative religious groups say attempts to push through a nationwide ban would fall foul of federal constitutional protections on freedom of expression and religion.

“‘Conversion therapy’ is a term coined by opponents of traditional sexual ethics that refers to any sort of help for people with unwanted homosexuality or gender confusion,” Jeff Johnston, a culture and policy analyst at Focus on the Family, a U.S.-based Christian organization, told the Thomson Reuters Foundation in a statement.

“These individuals simply want support from counselors, pastors and clinicians – through talk therapy, prayer and discipleship – to live according to their faith.”

If Democrats lose one of the Senate seats, the President-elect can push through LGBT+ rights under the powers of the executive office.

Top of the agenda for LGBT+ rights activists is the lifting of a ban on new trans personnel joining the military.

On the campaign trail, Biden – who was Obama’s Vice President – pledged to instruct the Pentagon to restore the right of trans people to serve in the military if he won.