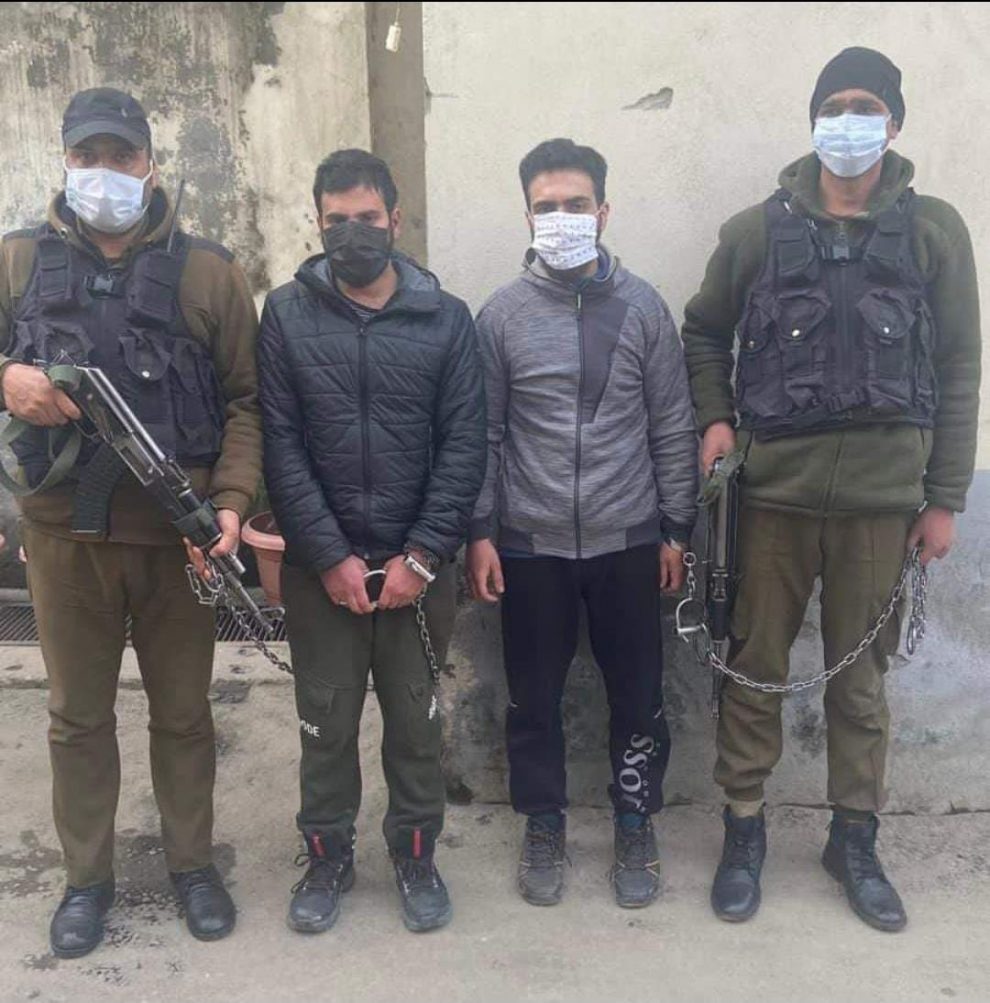 SRINAGAR: The Jammu and Kashmir Police on Tuesday claimed to have arrested two accused who threw grenades at Amira Kadal in Srinagar City.

In a statement issued, the police said that On 6th March one piece of information was received about, a grenade attack that took place near Amira Kadal bridge at about 4:20 PM. On receipt of this information, a case under FIR number 18/2022 under section 307 of IPC, sections 7/27 of Indian arms act, sections 16,23 of Unlawful activities prevention Act was registered at Shaheed Gunj Police station.

It was henceforth found out that a hand grenade was thrown towards a security vehicle and this blast caused injuries to a total of 38 persons, including 36 civilians and 2 police personnel namely Reyaz Ahmed SgCT and Jan Mohd, SPO, they said.

In light of this, Section 302 of IPC and sections 3,4 of the explosive substances act were added to this case.
Due to the Heinous nature of the case and due to the panic it created among the general public, SSP Srinagar Rakesh Balwal, IPS formed an SIT headed by Lakshay Sharma, IPS SP South and consisting of Shabir Ahmed SDPO Kothibagh, Fayaz Hussain SDPO Shaheed Gunj, Faizan Ali DySP/PC, Anzar Shah DySP(Probationer), Gowhar Hussain SHO Shaheed Gunj and Taseer Ahmed Inspector/PC as members, the statement reads.

The SIT employed modern means of investigation and based on the technical evidence like minute frame by frame analysis of the CCTV footages of a scene of the crime, footages of CCTVs in the whole of Srinagar city, Cell Tower dump analysis, IP dump analysis, the recreation of the crime scene and by examination of some eyewitnesses, they said.

Based on these, SIT was able to identify two accused who came on a two-wheeler without a number plate to commit this crime and fled on the same vehicle after committing the militant act. During the intense analysis of the CCTV trail in Srinagar city, the route adopted by both accused was located back to one neighbourhood in the Khanyar area, they said.

The statement further stated that it further came out that these two accused had committed the militant act on the directions of active militants in Kashmir valley.

The plan was to attack the parked security vehicle, but due to grenade throwing from a moving two-wheeler, the target was missed and the grenade exploded in an adjacent crowded area where many roadside vendors and buyers were busy in routine works.

Further, it was also found that this particular area was chosen due to the omnipresent chaos and turbulent traffic in this stretch of the area due to unorganised vendors and stalls on the road. There have been 2 other recent grenade attacks in this area i.e. on 10th Aug 2021 and on 25th January 2022. Further investigation is underway and is in full swing in this case, they said.

This will act as a strong deterrence to all the anti-social elements, who think of committing such atrocious crimes, concludes the statement. (GNS)