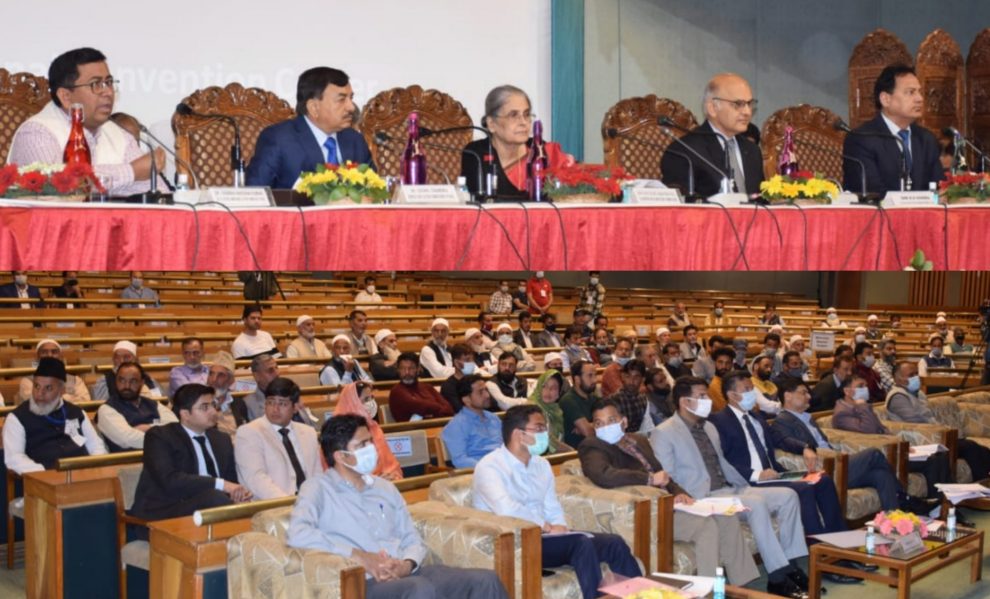 SRINAGAR: The two-day visit of the Delimitation Commission to Jammu and Kashmir concluded today with three members panel interacting with over 400 delegations in the last 48 hours.

The panel said that it will accommodate all the “genuine suggestions” put forth by the representatives of political parties that come under the purview of the Delimitation Act. In the morning, the Delimitation Commission held a sitting at SKICC where over 300 delegations and groups from civil society, political parties and others filed the objections and suggestions.

Reliable sources that the two sessions of sittings were held today at SKICC. The first session was held from 09:00 AM while the second session was held at 12:30 PM. They said that during the two sessions, over 300 delegations have met the panel and filed their suggestions or objections with regard to the proposal presented by the Commission over a month ago.

Earlier, over 100 delegations and groups met the panel in Jammu yesterday. Today, political representatives from different political podiums met the Commission at SKICC.

“Nobody from the National Conference met the commission at the party level. I don’t know whether someone has met the panel in individual capacity,” Imran Nabi Dar, spokesman of NC said.

Moreover, officials said that the interaction session culminated peacefully while over 400 delegations and groups have met them in the last two days at Jammu and Sirnagar respectively.

Meanwhile, DDC Member Iran Hafiz Lone said that in the objection filed by him, he has mentioned every constituency where the purpose of the delimitation has not been served in the proposal.

“We are hopeful that something positive will come out,” he said, adding that there should not have been a single day to meet the delegations. “The commission should have talked to the people for at least couple of days so that they could understand what delegations wanted to convey them,” he said.

In an official statement, the Delimitation Commission said that during the public sittings, the main points of all the representations were read out and the concerned delegations were given opportunity to highlight any additional points for the consideration of the Commission. “

“The general public, public representatives, social workers and members of political parties utilised this opportunity and highlighted their demands/suggestions/grievances before the commission which were duly noted by the commission,” the official statement said, adding that “The Commission informed the participants that the Delimitation exercise of Jammu and Kashmir has been carried out by the commission in a record time of two years despite the prevalence of Covid-19 pandemic in the country. It further noted that the entire exercise has been carried out as per the provisions of the Delimitation Act 2002 and the J&K Reorganization Act 2019, keeping in view population, public conveniences, communication facilities, geographical compactness of the areas as well as the existing administrative boundaries while delimiting the constituencies.”

The panel also said that it was also mentioned that the commission is mandated under the Jammu and Kashmir Reorganization Act 2019 to increase the Assembly constituencies from existing 83 to 90.

“The Commission for the first time in the history of Jammu and Kashmir has proposed to reserve nine seats for the Scheduled Tribes and in addition to it, seven seats have been proposed to be reserved for Scheduled Castes. The members of the public largely appreciated the efforts of Delimitation Commission and expressed their satisfaction on the entire exercise and termed it fully democratic and transparent process which will benefit the people of Jammu and Kashmir,” the statement said, adding that “the Delimitation Commission assured the delegations who called on the Commission in Jammu as well as Srinagar that the commission shall consider their genuine suggestions/grievances sympathetically in accordance with the Delimitation Act.”—(KNO)