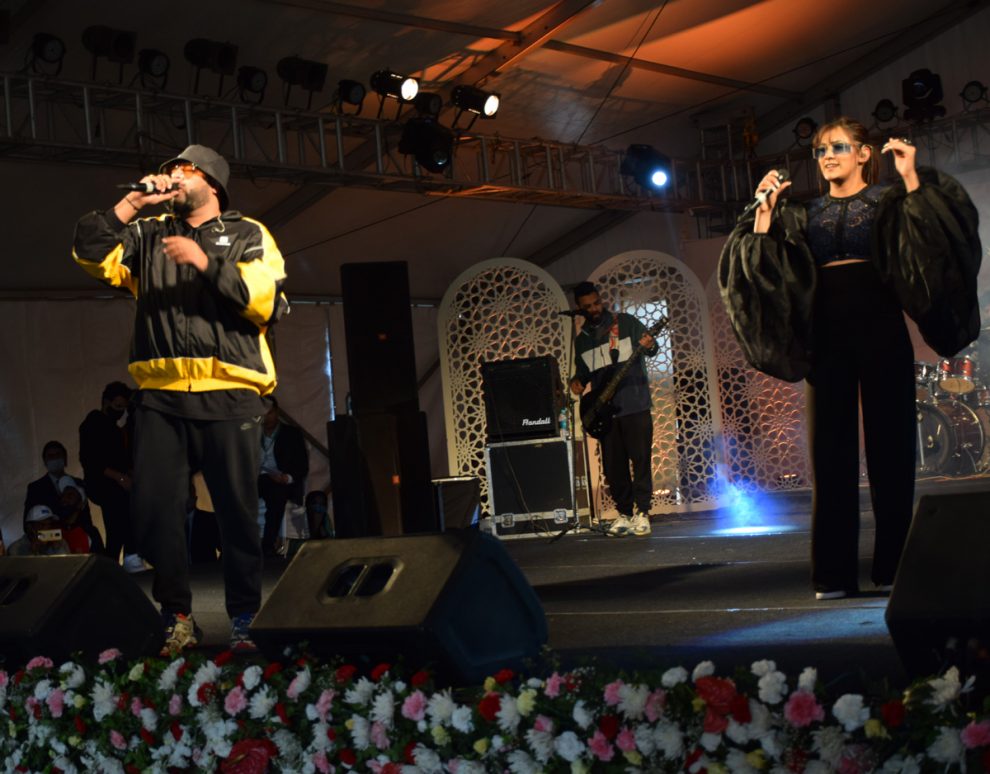 Srinagar: Sandwiched between Zabarwan Hills and the picturesque Dal lake, Asia’s largest Tulip Garden here reverberated with music as famous singers, including rapper Badshah, mesmerised the audience with some popular numbers on Saturday at the beginning of a six-day festival.

The ‘Tulip Festival’ was thrown open by Jammu and Kashmir Lieutenant Governor Manoj Sinha in presence of Kerala Governor Arif Mohammad Khan at the majestic Tulip Garden which was opened for visitors last month after two years.

Hundreds of visitors, locals as well as tourists, flocked the garden on the first day of the festival amid an almost full bloom of the tulip bulbs to be a part of the festival organised by Tourism and Floriculture departments.

The 30 hectare-garden presented a colourful look as 15 lakh tulip bulbs of various colours and 62 varieties captivated the visitors.

Several singers, including local ones, from the Union Territory performed some of the famous numbers, enthralling the audience. But it was singer and rapper Badshah who stole the show and hearts.

Badshah treated the audience to many of his numbers, including his famous track “abhi toh party shuru hui hai”, drawing a huge applause and whistles from them.

For many visitors it was a double treat to visit Asia’s largest Tulip Garden and to see one of their favourites perform.

“It is such a treat for us. We knew there was some festival, but we never imagined we would see Badshah perform in front of us, Gauri, a tourist, said.

The tourist said the festival made their visit to Kashmir special.

“I will cherish this visit for long. It was a dream to come here and seeing all this beauty and being a part of this celebration is something I will remember and cherish for long, she said.

Another tourist, Mahi from Dehradun, said she had heard a lot about the tulip garden but found it better than her expectations.

“This is such a beautiful place. We have enjoyed it a lot, she said, adding that the festival was an added bonus.

A host of activities, including cultural activities, musical evenings, will be held during the festival, officials said.

On the sidelines of the festival, various stalls have been set up to display and promote the rich traditions, culture, cuisines and crafts of the valley, they said.

This has been done so that the tourists become familiar with the valley’s rich culture and values, the officials said.

They said the festival presents a unique opportunity to display the diverse culture and cuisine of Jammu and Kashmir.

Speaking on the occasion, the Jammu and Kashmir lieutenant governor said his administration is taking several steps to increase the footfall of tourists to the Union Territory.

He said more plants and varieties would be added to the garden in the coming year to extend the duration for which the garden remains open.

Sinha said many new destinations are being opened up for tourists to extend their stay in Jammu and Kashmir.

Appealing to the tourists and filmmakers to visit and shoot in the valley, Sinha assured them of a secure environment and all the support.

Kerala Governor Khan said not only is Kashmir the most beautiful place in the world, people, their thoughts and their vision is beautiful as well.

“This is the people’s legacy which they have inherited from the great Reshis as the valley is the land of Sufi Reshis who have given Kashmiri people a rich culture, tradition and ethos, he said.