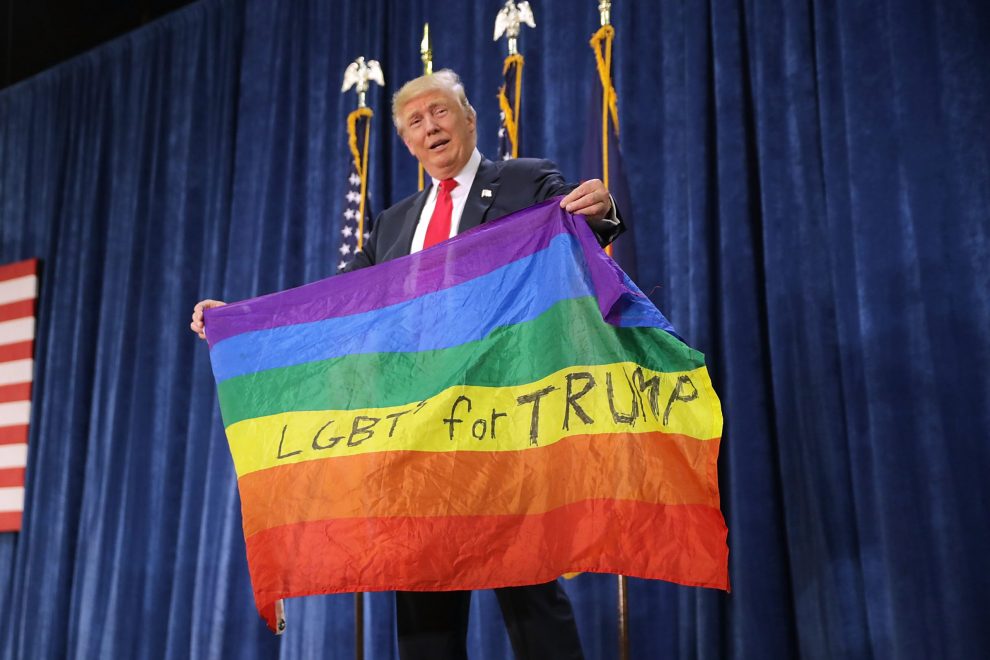 NEW YORK: Supporters say Donald Trump is the most gay-friendly president in history yet U.S. policy experts point to his record and polls show much stronger LGBT+ support for Democratic rival Joe Biden.

Lesbian, gay, bisexual and transgender Americans have traditionally voted Democratic in greater numbers and polls suggest Tuesday’s presidential election will be no different, despite efforts to woo the LGBT+ community with a run of “Trump Pride” rallies and gay-friendly speeches.

Far more striking, analysts say, is the fast-rising acceptance among conservative Americans of LGBT+ rights, nudging the right to rethink its long-held views on sex, sexuality and gender identity.

“What is historic is this shift in attitudes towards LGBT attitudes in the U.S. in such a short span of time, which forces Republican candidates and the Republican party to reconsider its position,” said Gabriele Magni, a professor of political science at Loyola Marymount University.

“It’s not just about LGBTQ people, but about people who care about lesbian, gay and transgender rights and who care about equality,” Magni told the Thomson Reuters Foundation.

Support among Americans for same-sex marriage, largely seen as synonymous with backing wider LGBT+ rights, has risen to 62% from 36% in 2007, according to the Public Religion Research Institute (PRRI).

Democrats still back same-sex marriage in greater numbers, the PRRI found, but positive sentiment has risen much faster among Republicans than among Democrats in the past decade, albeit from a lower base.

And the White House knows that could translate into more Republican votes among LGBT+ Americans come election day.

An estimated 9 million LGBT+ adults are registered to vote in the United States, according to the Williams Institute, a research center at the University of California.

Roughly three in four LGBT+ registered voters said they were voting for Biden, against 17% who said they backed Trump, according to a recent report by U.S. LGBT+ advocacy group GLAAD.

The findings were consistent with exit polls from the past half century of presidential elections, where Republicans won about a fifth of the LGBT+ vote.

Yet the White House has gone out of its way to court the gay vote this year, holding half a dozen rallies in marginal states in the past several weeks.

It is a daring break with past presidential politics, say analysts, as U.S. conservatives have largely avoided – or at times actively targeted – LGBT+ Americans to appease the ‘family values’ beloved by many Christian conservatives.

Things have not always gone swimmingly with the new move.

At a “Trump Pride” event last week, his daughter Tiffany Trump was the headline speaker yet stumbled over the LGBT+ acronym – mangling initials and missing out the ‘T’ for transgender – even as she trumpeted her father’s credentials.

“I know what my father believes in. Prior to politics, he supported gays, lesbians, the LGBQIIA+ community,” the president’s fourth child said.

Her linguistic gaffe, though, met with widespread scorn on social media, with commentators spotting an own goal.

“It further underscores their complete ignorance of LGBTQ people and culture,” said historian Jim Downs, who has written a history of gay liberation. “And it further reveals how much of a sham this is.”

Activists dismiss Trump’s late decision to target LGBT+ voters in key battleground states as a desperate measure given the administration’s record on gay and trans issues.

“This event is a pathetic attempt to hide his appalling record and it’s fooling no one,” Nadine Smith, executive director of Equality Florida Action, a U.S. LGBT+ civil rights group, said after a recent “Trump Pride” event in Tampa.

“We are tired of Trump’s lies and our community understands a second term would be devastating.”

Since winning office in 2016, Trump has banned trans people from joining the military, supported efforts to block trans students from using the bathroom of their choice and rolled back healthcare protections for LGBT+ people.

This summer, his Department of Housing and Urban Development proposed a rule to allow homeless shelters to bar transgender Americans and the Education Department tried to block trans girls from running track at Connecticut high schools.

Richard Grenell, an ex-ambassador to Germany and former acting director of national intelligence, says despite this record, Trump is “the most pro-gay president in history.”

Grenell has cited the president’s global campaign to decriminalize homosexuality and his vow to end U.S. HIV transmissions by 2030 as proof of presidential commitment to the cause in speeches at “Trump Pride” events.

That message has resonated with supporters such as Sean Bryant, a gay man from Schenectady, New York, who is semi-retired at 65 and also believes the president is the “most pro-gay” U.S. president in history.

“Homosexual men and women, right now, in this country, at this very moment, have more freedoms and more rights, and everything is perfected to the nth degree,” Bryant told the Thomson Reuters Foundation.

Downs said there was no evidence that Trump’s embrace of the gay community was anything but electoral tactics.

“They’re just doing this as a way to capture votes,” Downs said. “It’s more manipulative than it is significant.”

Bryant disagrees – but says the Democrats cannot expect to own the gay vote forever when gay Republicans like him exist.

“It’s not an anomaly,” Bryant said. “The leftists are more vocal, they’re more upfront, they’re more visible, and … they’re assumed to be the majority.”

“When I came out years and years ago, I was basically rejected by all of the Democrats in my family,” he said.

“And my Republican family embraced me.”