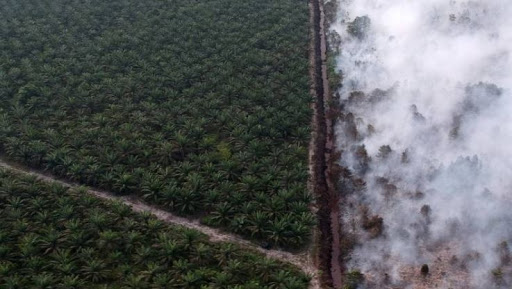 A report by thinktank Orbitas looked at the financial risks to tropical farmers and agricultural businesses – including palm oil, soybean and beef – if they do not adapt to new climate actions by governments, companies and consumers.

It found that those risks are as significant in agriculture as they are in the energy and transport sectors.

This is party due to an expectation that prices paid for carbon storage in forests could rise above the revenue that could be obtained from using that same land for agriculture, said Mark Kenber, managing director of Orbitas.

“A response to climate change that gets the world anywhere close to net-zero emissions will require farming and agro industry to transform,” Kenber added.

“This is an enormous blind spot for investors.”

Green groups blame the production of palm oil, the world’s most widely used edible oil, and other agricultural commodities for much of the destruction, as carbon-storing forests are cleared for plantations, ranches and farms.

The Orbitas study focused on tropical farmers and agriculture businesses, many of which have large land banks for future expansion on their balance sheets.

It analysed the consequences for these firms from changing climate change policy – such as government carbon financing and forest protection schemes, corporate zero-deforestation and emissions pledges, and changes in consumer habits.

It found that companies whose business strategies rely on expansion into forested territories will confront vastly increased land prices and possibly no access at all.

Those that already hold forest concessions as land banks will face significant asset stranding, although they could benefit from carbon credits if they adapt their businesses and become more sustainable and transparent.

“Even under pretty modest policy, deforestation will have to end quite soon – and that’s between 2025-2040 – depending on the carbon price and strength of policy,” London-based Kenber told the Thomson Reuters Foundation by phone.

In Indonesia, up to 76% of unplanted forest concessions and 15% of existing palm oil assets could be written-down or off under a meaningful national climate transition, the report said.

Carbon credits and regulations will further disrupt agricultural businesses, it said, with global palm oil, beef, and soybean producers facing up to $19 billion in additional costs each year.

“Demand for palm oil is going to continue to grow whatever happens. Those who will win will be those who can satisfy that demand by sustainably increasing yields (on existing land), managing their emissions and looking for complementary revenue streams,” said Kenber.

Public and private finance will be needed to enable small-scale palm oil growers – who are responsible for about 40% of output from top producing countries Indonesia and Malaysia – to also improve their yields, he added.

Robin Chazdon, a professor at Australia’s University of the Sunshine Coast who has researched the best places to replant forests, said caring for land and water must become the new bottom line – not only for communities and countries but also for businesses and corporations.

Corporate agendas and demand for short-term economic gain currently drive much use of the earth’s resources, she said.

For businesses, “the resulting losses of biodiversity, escalating carbon emissions, and decline of ecosystem services have been externalised and dismissed as ‘not my problem,'” she said.

“Now these issues have become everyone’s problem and the fate of the planet hangs in the balance.”

“Feeding the world does not have to mean cutting down more forests,” Picken said.