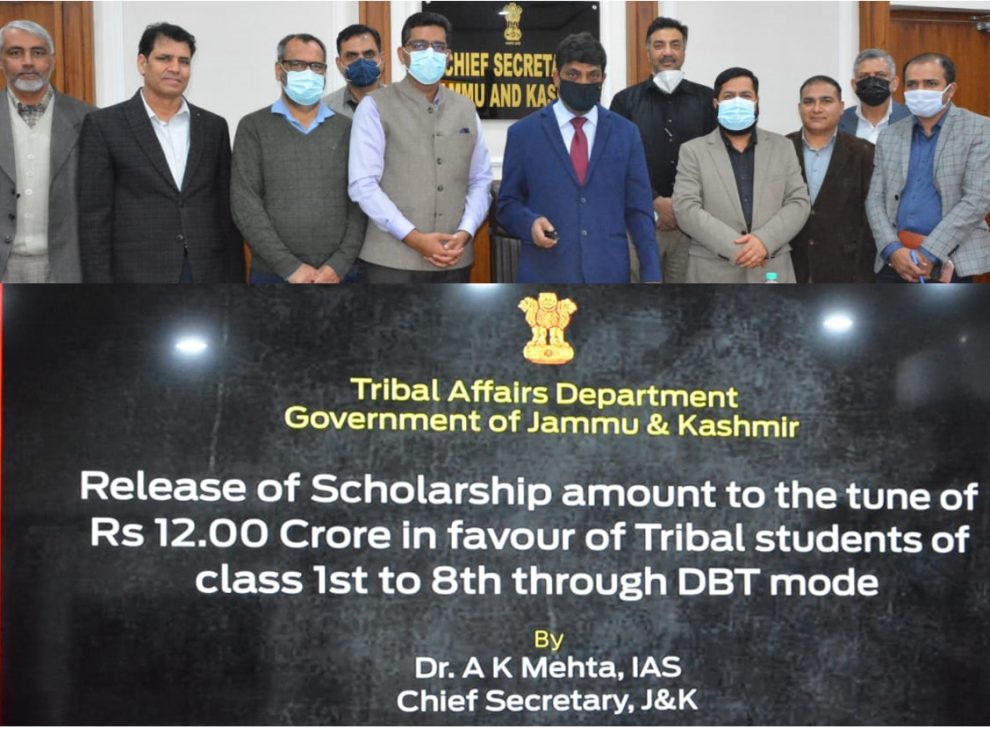 Rs. 10 crores to be earmarked for skill development of tribal youth; Department to complete transit accommodations by July 2022

The Chief Secretary was apprised about the outcome of the first-ever survey of the transhumant population in Jammu and Kashmir which has captured various socio-economic indicators of this segment of population.

It was informed that the Tribal Affairs Department has taken various flagship initiatives during 2021-22 for the welfare of the beneficiaries with a focus on implementation of Forest Rights Act, tribal tourist villages scheme, cluster tribal model villages, tribal health plans, and transit facilities.

The Chief Secretary was apprised about the deficient mobile/internet connectivity and limited availability of health facilities at higher pastures and dhoks. The Chief Secretary directed the Department to ensure mobile and internet coverage of all tribal habitations, besides, establishment of teleconsultation medical facilities specifically in dhoks; within 6 months. It was further directed that the local youth is provided with adequate first-aid training to tackle emergency situations, besides ensuring primary health care facilities at base camps, in consultation with the National Health Mission.

Under the Integrated Village Development Scheme, the Tribal Affairs Department is undertaking various projects to improve the parameters of health and nutrition, drinking water and sanitation, education, livelihood, electricity supply, road connectivity, and mobile and internet connectivity; in the tribal habitations.

Dr. Mehta emphasized on holistic development of the community and directed initiation of slew of measures to be accomplished in a time-bound manner. It was decided that intensive efforts will be undertaken for saturation of aadhaar cards, golden health cards, bank accounts, besides ensuring vaccinations of livestock.

The Department was also given the target of doubling income of the tribal population by focusing on integrated development of wool, milk, and forest-based industries. The Department was further asked to complete the pending FRA cases within three months and ensure the formulation of TSP by all departments within one week.

The Chief Secretary was also apprised about the pilot project to assist the bi-annual tribal transhumance in Jammu and Kashmir by providing dedicated vehicular transportation facilities. The Chief Secretary directed broadening the scope of the project by facilitating the migration preferably through national highway in vehicular mode.

The Department was also asked to establish a tribal helpline number and ensure completion of all 08 transit accommodations by July 2022 with 02 to be completed by the end this financial year.

Moreover, Dr. Mehta impressed upon the Department to prioritize skilling of tribal youth through the network of youth clubs and asked Mission Youth to exclusively provide gainful employment opportunities to the eligible youth from tribal areas for which Rs. 10 crores will be specifically earmarked. The Department was also asked to promote tourism in tribal areas by roping in various stakeholders.

To promote education among the targeted population, the Department is establishing Eklavya Model Residential Schools in Anantnag, Kulgam, Gurez, Kotranka, Rajouri and Mendhar which will commence operations from April 2022.