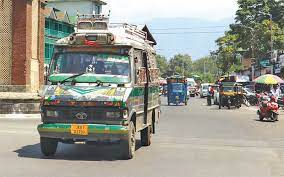 SRINAGAR: Kashmir Welfare Transporters Welfare Association, an amalgam of various transporters associations, on Monday called for a complete ‘Chaka Jam’ (stop wheels) strike on March 30 in favour of their demands.

As per the new order, all the commercial vehicles are being phased out after 20 years in Jammu and Srinagar.

They have also demanded revocation of the order, calling for the installation of vehicle tracking devices in the passenger vehicles. “Order regarding the collection of Passenger tax which, has been linked the renewal of route permit of the vehicles shall also be recalled,” the Association said in a statement. They have also demanded direction to SRTC to run its fleet as per “timetable” and refrain from running in an “illegal manner.” (GNS)