Awantipora, Jan 29: Three militants have been killed in an encounter that raged between security forces and militants in Mandoora village of Tral belt in South Kashmir’s Pulwama district on Thursday.

A senior police officer told the news agency that three unidentified militants have been killed so far while as the search operation is on in the area.

Earlier, an official said that a joint team of Police, Army’s 42 RR and CRPF launched a Cordon and Search Operation (CASO) on specific information about the presence of militants in the area. 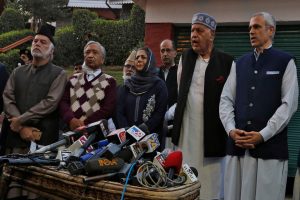 LG Sinha invites heads of all political parties in J&K