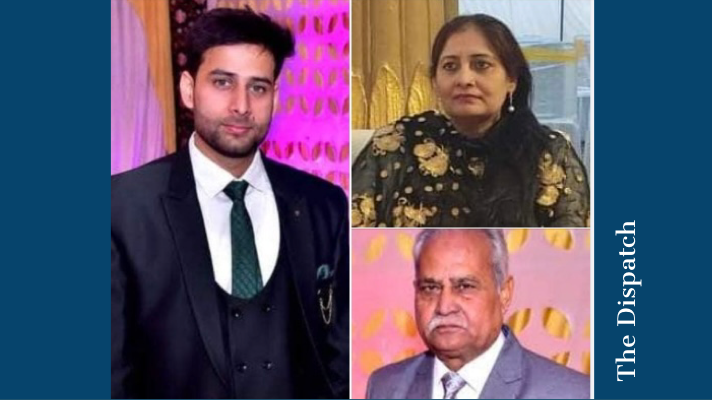 The Dispatch Staff
Add Comment
Mehmood Ali Khan, his wife Darakshan and son Shavez were actually murdered in Lucknow by Khan’s elder son Sarfaraz on January 5. He constructed a fake story of their travel to Jammu and Kashmir to mislead relatives and the Police

JAMMU: The case of Lucknow family reporting missing in Jammu and Kashmir while on a leisure tour has turned out to be a tragic and inhuman story -they were actually murdered by their family member who created a fake missing story to mislead the Police.
The Jammu and Kashmir Police in Ramban had launched a wide-scale search operation to locate a Lucknow family believed to have gone ‘missing’ along the Srinagar-Jammu highway at Ramsu, since last Friday morning.
SSP Ramban Mohita Sharma had said that the search operation was launched after a family from Lucknow in Uttar Pradesh informed through social media that their relatives on way to Kashmir had gone incommunicado after purportedly ‘getting stuck at Ramsu area on Friday morning in the aftermath of a huge landslide along the highway.’
“The relatives have said that after receiving the messages through WhatsApp about them getting stuck, there has however been no communication with them for almost three days now”, she had said.
The kin, the official said, had identified the ‘missing persons’ as Mehmood Ali Khan (65), Darakshan (52) and Shavez Khan (26).
Even as the Ramban Police and their counterparts in other districts continued the search operation with all sincerity, it has now turned out that it was brutal murder executed by elder son of the couple. The family was never on tour of Jammu and Kashmir.
Senior journalist Rehmatullah Rounyal who is well acquainted with one of the relatives of Mehmood Ali Khan, purportedly missing, has confirmed that the case has been sorted out by Uttar Pradesh Police.
Quoting Salim Khan brother in law of Mehmood Ali Khan, Rounyal said, all three were murdered by elder son Sarfaraz Khan on January 5, 2022, the day they were leaving towards Jammu by train.
After disposing their dead bodies, he meticulosly planned to mislead the relatives and police. He clandestinely visited Jammu Kashmir and messaged via Whatsapp from his father’s mobile on January 14 morning ,in which he posed as his younger brother Shavez and said that they are stuck on highway due to landslides. He even posted some pictures of Highway.
Lucknow Police have taken Sarfraz Khan into custody and further investigation is in progress. Rounyal further said, “since Salim Khan, brother in law of Mehmood Ali Khan is a friend of mine, he contacted me on 16th of January and sought help to trace them out. On my part, I sought community help through my facebook post.I am extremely thankfull to Ramban Administration, Ramban police,SOG Ramban,CRPF,NGOs and friends,who worked overtime to trace out the missing family. Particularly,qudus to SHO Ramsu and civil QRT team Ramsu, who left no stone unturned right from Digdole to Ramsu to get any clue about them”.

The Dispatch is present across a number of social media platforms. Subscribe to our YouTube channel for exciting videos; join us on Facebook, Intagram and Twitter for quick updates and discussions. We are also available on the Telegram. Follow us on Pinterest for thousands of pictures and graphics. We care to respond to text messages on WhatsApp at 8082480136 [No calls accepted]. To contribute an article or pitch a story idea, write to us at [email protected] |Click to know more about The Dispatch, our standards and policies
TagsJammu Kashmir Police Lucknow family missing in Jammu Kashmir The Dispatch