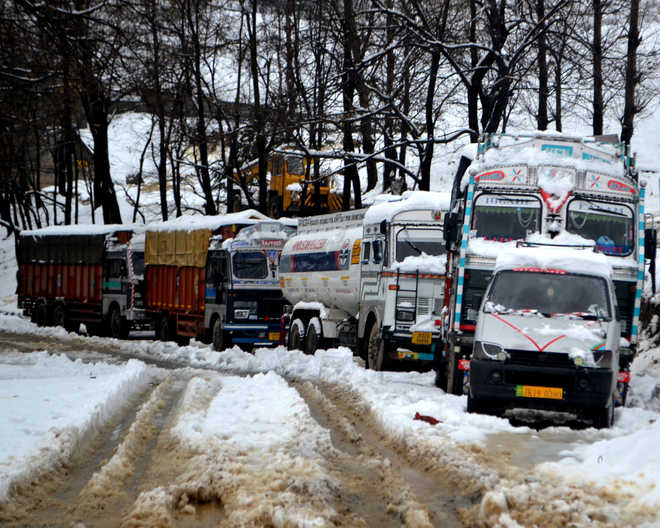 Srinagar, Nov 24: The traffic was on Tuesday restored on 270-km-long Srinagar-Jammu national highway, which connects Kashmir valley with rest of the country, after remaining suspended on Monday due to landslides, shooting stones and slippery road conditions following fresh snowfall and rain.

“Kashmir highway was reopened for one-way traffic on Tuesday after remaining closed on Monday,” a traffic police official told UNI.

He said traffic will ply from Jammu to Srinagar. “About 250 to 300 Kashmir-bound vehicles, which were stranded at various paces on the highway on Monday, were also on way to the valley,” he added.

He said traffic was on Monday afternoon suspended on Srinagar-Jammu national highway due to slippery conditions and landslides, triggered fresh snowfall and rain.

However, he said the National Highway Authority of India (NHAI) and Border Roads Organisation (BRO), responsible for the maintenance of the highway, immediately pressed into service sophisticated machines and put through the road for traffic.

The historic Mughal road, connecting Shopian in south Kashmir with Rajouri and Poonch in Jammu region, remained closed for traffic for the second day due to fresh snowfall. Traffic on the road was recently restored after remaining suspended for four days due to snowfall.

“The road, seen as alternative to Srinagar-Jammu highway, remained closed due to slippery conditions because of fresh snowfall on Monday,” he said.

The road was being used to transport fresh fruit from Kashmir valley to different mandis, including Jammu after frequent closure of the highway this summer.

Traffic will be resumed only after weather improves and a green signal is received from traffic police civil administration official posted at different places on the road, which remains closed for about six winter months due to heavy snowfall.