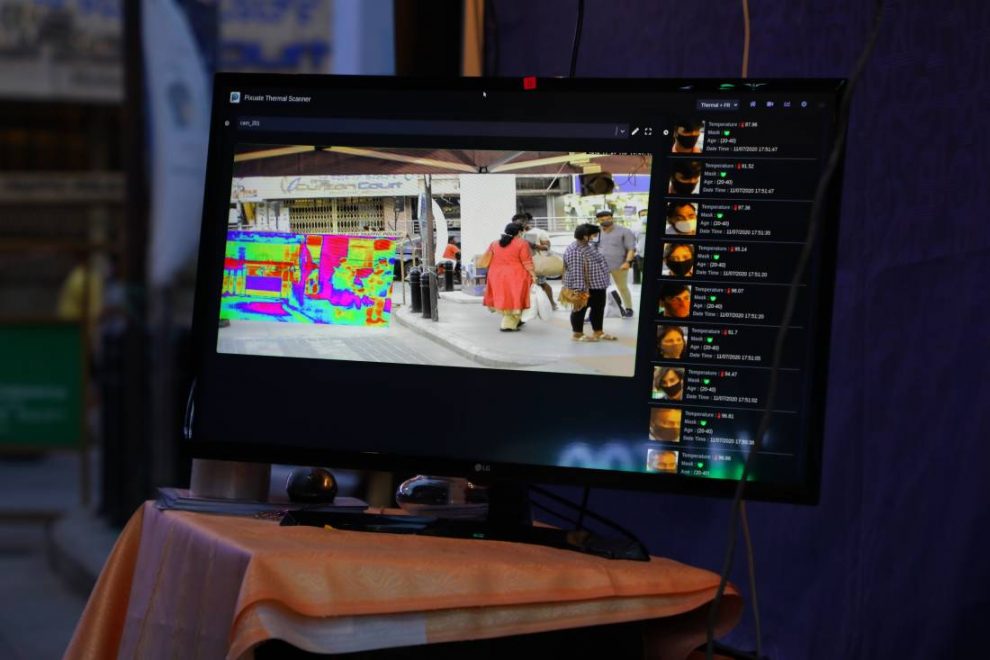 NEW DELHI: From a tracker that can tell where someone sleeps at night to a device detecting whether they have a mask on or not, India’s government is betting on hi-tech solutions to fight COVID-19, despite growing privacy concerns.

Officials have called on local firms to develop technology powered by artificial intelligence (AI) to help stem the spread of the novel coronavirus.

More than 8.5 million people in India have been infected by the virus, according to the Johns Hopkins University’s tracker, making it the worst-affected country after the United States.

With nationwide lockdown restrictions lifted, people are starting to go back to work and travel again, prompting public and private players to turn to data-driven tech to track their movements, check temperatures and enforce social distancing.

“The world is getting back on its feet and a new sense of normal is coming back. Now is the time to put these solutions in place so people feel safe,” said Akshata Kari, co-founder of Pixuate, an AI-based video analytics firm in tech hub Bengaluru.

Pixuate was one of six companies selected in May by the government’s Technology Development Board (TDB) to develop “a low-cost solution to identify persons with abnormal body temperature in a crowd” and alert authorities.

Pixuate’s product, which uses thermal cameras, has features such as facial recognition, and the ability to track a person – even if they are wearing a mask – and predict their age, gender and race, the TDB said in a statement.

Such data-driven technologies are gaining momentum across the world as countries look for ways to slow the virus’ spread, but their merit and effectiveness are debatable, warn privacy rights advocates.

Urvashi Aneja, founding director of policy and advocacy collective Tandem Research, which has been reviewing tech tools being used during the pandemic, described some as “alarming”.

“When you create a society where you have extensive monitoring of citizens all the time, you also create a situation where people start self-sanctioning or self-censoring. And that is fundamentally not good for a democracy,” said Aneja.

Pixuate is set to install its new product by the end of the year in “some very large businesses and also government entities”, Kari said, without naming them.

Last week, authorities fitted the device at a popular shopping hub in southern Bengaluru city as part of a clean air project aimed at making the area pedestrian-only on weekends, Kari added.

“There are behavioural changes that are happening, and the checks, like temperature, wearing masks, social distance protocols or the way we greet each other … have changed for good,” she said.

“In the post-COVID world, this will be the new normal, especially if we want to prevent another contagion.”

At least 88 tech tools have been rolled out to support India’s public health response to the pandemic, said Aneja, a speaker at the Thomson Reuters Foundation’s annual Trust Conference on Wednesday.

While use of the app is generally voluntary, it has been made mandatory for food delivery workers, government and some private sector employees.

Also earlier this year, municipal workers in northern Chandigarh city were told they had to wear GPS watches that tracked their efficiency, triggering backlash from employees, campaigners and tech experts over privacy concerns.

“Technology should be used for improving access to and quality of healthcare,” said Praveen Gedam, deputy CEO of the National Health Authority, in emailed comments.

“Advances in digital health must be accompanied by necessary safeguards and protections of the privacy of individuals, and due process must be followed.”

Broadcast Engineering Consultants India Limited (BECIL), under the Ministry of Information and Broadcasting, said it wanted the first device to be wearable, like a wristwatch, so it can track the locations of medical workers during work hours.

The patient tracking tool, BECIL said, should detect “where the suspect has spent most of his or her time and who all he or she has met” as well as where they order food from, go for walks and sleep at night.

This prompted the Internet Freedom Foundation (IFF), a New Delhi-based digital rights group, to file a legal notice to BECIL to stop the procurement process.

Devdutta Mukhopadhyay, a lawyer with the IFF, said BECIL has not yet responded to the organisation’s legal notice and it was unclear whether the government enterprise had acquired the devices.

BECIL did not respond to several requests for comment.

Mukhopadhyay noted that as long as India has no data protection law or independent data protection authority, there are few safeguards and no recourse if users’ data is abused or their digital privacy rights are violated.

The personal data protection bill currently under review by a parliamentary panel does not cover surveillance activities.

The bill does have provisions to allow the government to bypass protection standards and consent in certain circumstances, such as national security or the investigation of an offence, said Mukhopadhyay.

“That’s hugely problematic because it’s a blanket exemption being granted to the government,” she said.

The minister for electronics and information technology, Ravi Shankar Prasad, has vowed that India will have a strong personal data protection law that will address citizens’ concerns over data privacy.

“Data must belong to the sovereign nation concerned to protect the privacy of its people,” he said in a virtual G20 meeting in July.

But with the flurry of tech measures launched in response to the coronavirus, campaigners warn against “function creep” – the use of data for purposes other than those for which it was collected – after the pandemic is over.

A “sunset clause” – or expiration date – on tech tools, which would include the deletion of data after the pandemic, could be a solution, said Aneja of Tandem Research.

“Otherwise, you will just see these technologies being repurposed into something else and that’s dangerous,” she said.

Mukhopadhyay at the IFF added that companies should give access to and allow independent third parties to publicly audit their technologies to build trust.

She also called on the government to introduce digital literacy and awareness lessons in school, to teach children about issues like cyber security, data privacy and fake news.

“This is something that needs to be taught from a young age, because we need everyone to care about this,” she said.