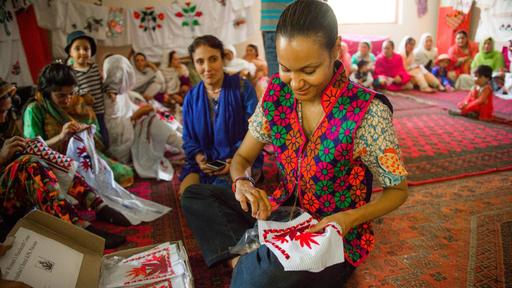 Stella Jean, the Haitian-Italian designer who has just announced a boycott of Milan Fashion Week, says she has suffered racism all her life.

But it was only when the 41-year-old encountered it in Italy’s mainly white fashion industry that she realised just how unwilling people were to talk about it.

Now Jean, whose brightly-coloured skirts and dresses are worn by celebrities including Beyonce and Rihanna, says she can no longer remain silent in the face of what she sees as a rise in racially-charged incidents in Italian fashion.

The former model, a protege of Giorgio Armani and the only Black person ever to be appointed to Italy’s influential Fashion Council, will not show her latest collection at Milan Fashion Week later this month in a protest over racism.

“As the first and only Black designer in the history of the Fashion Council, it is my responsibility to explain to those who haven’t noticed the extreme marginalization in which my minority lives,” she told the Thomson Reuters Foundation.

“An entire generation of new Italians … have lived for too long in a condition of total invisibility.”

Italian fashion houses have been criticised in recent years for creating products deemed racist, including Gucci’s 2019 “Blackface” sweater with a mouth cut out and trimmed in red, and Prada’s 2018 keychain of a monkey with inflated lips.

Jean said that while discrimination had been an “uncomfortable and punctual travel companion” in her life, she only encountered it in the fashion industry recently, when she raised questions of race.

When she did so, she found that “broaching the subject of racism in Italy is to this day still an unconfessable taboo”.

Italy is whiter than most other European countries and there has been relatively little debate over the country’s colonial past, racism or integration.

About 9% of Italy’s 60 million registered residents are foreigners but of these, less than half a million come from sub-Saharan Africa.

Last week Italy’s Foreign Minister Luigi Di Maio drew criticism for sharing “Blackface” memes of himself on his Facebook page, a response to a wave of earlier memes that surfaced when he appeared in public with a deep sun tan.

Jean said there had been years of silence and denial around questions of race in Italy.

Earlier this year, she released a film showing Italian women of Black and Asian origin revealing the racist comments they confront on a regular basis.

Then last month she launched an appeal for reform in the Italian fashion industry under the slogan, “Do Black Lives Matter in Italy?”.

Anna Wintour, the editor-in-chief of fashion bible Vogue, apologized in June for “hurtful and intolerant” mistakes by the magazine, which she said had “not found enough ways to elevate and give space to Black editors, writers, photographers, designers and other creators”.

In June, French cosmetics company L’Oreal rehired Munroe Bergdorf, a British Black transgender model who it sacked in 2017 after she described all white people as racist.

In Italy too, there have been signs of progress, said Jean.

“Following the murder of George Floyd, the most important gatekeepers of Italian fashion showed unprecedented social solidarity with the American cause,” she said.

“In fashion we have to start … amplifying the voices of women and men of all colours.”