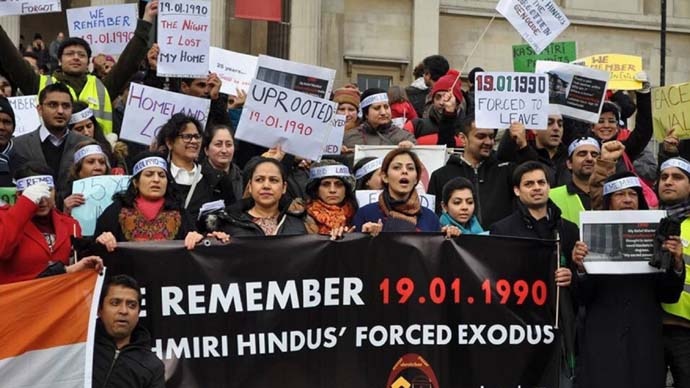 Without going into the poisonous politics of what led to the exodus of nearly entire Kashmiri Pundit community, beginning in 1990, what is more important is to rationally analyze, why the presence of a non-Muslim community of ethnic Koshur Hindu Pundits is must for the existence of Koshur identity The absence of Koshur speaking Kashmiri Pundits cannot be fulfilled by any other ethnic, linguistic or religious minority in Kashmir valley. The absence of Kashmiri Pundits can neither be filled by Kashmiri Sikhs, Muslim Gujjar & Bakarwal community, Pahari Muslims or Ladakhi /Kargili Muslims as none of these are ethnically Koshur. Being “Koshur” is a distinct ethno-cultural and linguistic identity for both Kashmiri Muslims and Kashmiri Pundits that makes them different from other Muslim and Hindu communities of South Asia respectively.

The fact that Kashmiri Pundits were called Koshur Battas vernacularly in Kashmir, rather than a Hindu community is a pointer to the fact that Kashmiri Pundits were considered as part of the Koshur fabric regardless of their non-Muslim faith. Being a “Koshur” meant being Koshur Musalman and Koshur Batta rather than a Kashmiri Muslim and Kashmiri Hindu. The exodus of Kashmiri Pundit community was a massive cultural blow that literally destroyed the very foundations upon which Koshur identity had evolved all these centuries.

Sadly, the present generation of Kashmiri Muslims and Kashmiri Pundits who were born in 1990s, one in the tumult of violence and instability and another in the cultural detachment understands very little of this symbiotic Koshur Muslim – Koshur Pundit cultural identity that defined a Koshur person. The world view of the younger generation of Kashmiri Muslims and Kashmiri Pundits is determined by biased historical narrative based on hatred and bitterness and there seems to be hardly any efforts or interest to bring the younger generation of Koshur Pundits and Koshur Muslims together to once again restore the cultural identity of being a “Koshur”.

Kashmiri Pundit community living in exile is staring at cultural extermination. The younger generation of Kashmiri Pundits born in different parts of India and abroad are so detached from the ethnic Koshur cultural roots that ethnic identity of being a Koshur is now only being superficially preserved through making of Kashmiri cuisine at home and celebration of Pundit festivals in alien land, when such festivals are actually connected with the season, geography and topography of Kashmir valley. It is also not fair to expect Kashmiri Pundits born outside Kashmir valley to understand and appreciate the cultural and linguistic nuances of being Koshur while living in Bangalore or New York.

We don’t realize, but Koshur community is rapidly going through such catastrophic cultural transformation that the very identity of being a Koshur is now at stake. It is important to understand that rebuilding of this Koshur identity in this modern, integrated digital age cannot be done in isolation. Younger generation of Koshur Pundits and Koshur Muslims have to come together to recraft and restore this Koshur identity together and collectively.

The significant question is that, is the Kashmiri community even interested to do so?

It is understandable that younger generation of Kashmiri Pundits are now employed outside Kashmir valley and have now built-up financial stakes in different parts of India and abroad and it is very difficult for them to return meaningfully back to Kashmir valley, which remains besieged by violence, instability, declining economy and poorly functioning internet services.

But that doesn’t mean that Kashmir has lost all sentimental and material value even for well established Kashmiri Hindu Pundit diaspora. Kashmir valley despite all the trauma, still remains breathtakingly beautiful and endowed with abundant natural resources that not only rival but even exceed many similar alpine European and North American countries and regions. Kashmir with its unique strategic location between Central and South Asia with its European alpine climate has a tremendous economic potential to rival even Davos in Switzerland. The younger generation of Kashmiri Pundits, with their great and varied expertise in different fields all around the world can contribute a lot in the modern economic revival of Kashmir valley and thereby rebuild the age old, much loved notion of Kashmiriyat, which was once an envy of the world. This is perhaps the time to reach out to the younger generation of Kashmiri Pundits with new vision and rigor and bring them back to Kashmir to rebuild the lost essence of being a Koshur.