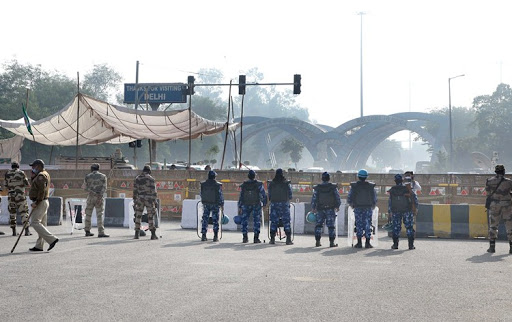 Security has been tightened in all states and Union Territories in the wake of the call given by farmer unions to observe ‘Bharat Bandh’ today. The farmer unions protesting against the new farm laws at the borders of the National Capital have called for a nationwide strike between 11 am to 3 pm today.

Information and Broadcasting Minister Prakash Javadekar today attacked opposition parties for their support to Bharat Bandh against farms laws alleging that confusion has been spread among farmers about the legislations. He told media in New Delhi that opposition parties are playing politics over it and asserted that the laws are in the interest of farmers. He alleged that Congress, NCP, DMK and others are hypocritical over this issue as they had passed the contract farming act while in power. He added that Congress has mentioned the introduction of these laws in their manifesto. The Minister said farmers had demanded remunerative price additional to the cost and the Narendra Modi government are giving them 50 percent above the cost.

Uttar Pradesh Chief Minister Yogi Adityanath has said that the Central and State Governments are constantly working for the welfare of farmers. Yogi Adityanath came down heavily on opposition parties for spoiling the atmosphere under the pretext of farm laws. He said stand of some political parties on farm laws shows their double standard.

Gujarat Chief Minister Vijay Rupani has said that Bharat Bandh call is an attempt of Congress and other political parties to show their existence under the pretext of farmers. Addressing a press conference in Gandhinagar, Mr Rupani said, Gujarat will not join the opposition supported Bharat Bandh as farmers are not with opposition.Bharat Bandh call has failed to evoke any response barring few pockets in Gujarat. The cities and towns in the state are functioning as per daily routine. Vehicular traffic and business establishments in Ahmedabad, Vadodara, Surat and Rajkot are functioning normally.

In Bihar, normal life is unaffected during Bharat bandh. Rail, road and air traffic is as usual. Offices, shops and business establishments are open. AIR correspondent reports that examination of several universities including Patna University has been suspended today as precautionary measures. The state government has deployed addition forces across the state to avert untoward incident during bandh.

In Telengana, trade unions held demonstrations at busy locations in Hyderabad. AIR correspondent reports that Bank Employees unions however stayed away from the bandh and banking services are operating as usual. Government offices and offices of Public Sector undertakings are working as usual.

No effect is being seen in Madhya Pradesh on the call of Bharat Bandh called by some farmer organizations to protest against the new agricultural laws. AIR correspondent reports that all the markets and business establishments in the capital Bhopal are open and the day-to-day functioning is going on smoothly. Trade organizations and transport associations have also said that the transport system and other business operations will continue. Traffic is also continuing uninterrupted in all parts of the state. The business is going on daily in all the business centers including Cantonment, Siyaganj, Indore which is considered as commercial capital. In Umaria district, India is ineffective and markets are open like before. In Chhindwara, Morena, Sehore district, there was no impact of the bandh. Extensive security arrangements have been made throughout the state to maintain peace, with the Corona protocol being followed.

Bandh has moderately affected the normal life in the union territory of Puducherry.

Traders’ body Confederation of All India Traders (CAIT) and the All India Transporters Welfare Association (AITWA) have said that the markets across the country including in the National Capital will remain open today and transport services will also remain operative. Issuing a joint statement, CAIT and AITWA said traders and transporters will not be participating in the Bharat Bandh.

Delhi Traffic Police has informed that borders along Singhu, Auchandi, Piao Maniyari and Mangesh will remain closed, while NH-44 has also been closed on both the sides. The Chilla border on Noida link road is closed from Noida to Delhi while the Gazipur border on NH-24 is closed for traffic from Gaziabad to Delhi. Delhi Traffic police has asked commuters to avoid Outer Ring Road and GT Karnal road.