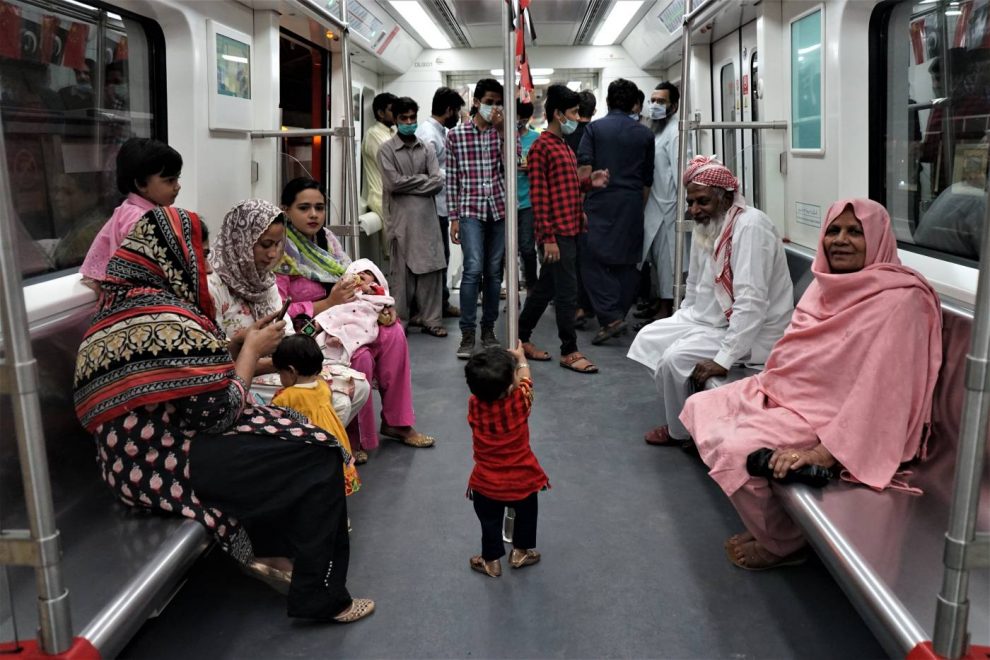 LAHORE, Pakistan: When bulldozers began roaring in front of Shakeel Ahmed’s home in Lahore’s historic Anarkali district, he and his neighbours huddled together at a nearby shrine – despairing about the loss of their property and land.

Like other families in the area, Ahmed, 40, said he was forced to sell his home to the Punjab provincial government for far less than market value to make way for a new Chinese-financed metro in Pakistan’s second-largest city.

The $1.8-billion Orange Line, which started operating in October, promises to cut traffic and air pollution in one of South Asia’s most-polluted urban hubs, but it has left hundreds of people facing an uncertain future.

“I didn’t want to go anywhere else. This is the only place I’ve known in my life,” Ahmed told the Thomson Reuters Foundation.

Today, he rents a room behind the revered Mauj Darya shrine, but fears being priced out of the rapidly gentrifying area – which now has its own metro station – in the years to come.

The Orange Line, operated by China Railway, NORINCO International and Pakistani partners, is one of about two dozen new mass transit projects Beijing is launching globally as part of its trillion-dollar Belt and Road Initiative.

Standing in front of Anarkali’s gleaming metro station, city resident Kafeel Chaudhary, 54, said the train would benefit Pakistan’s economy, which like those of its regional neighbours has reeled under the effects of the coronavirus pandemic.

“We have very few examples of this type of modern infrastructure in Pakistan. These trains are usually only found in Europe. But now Pakistan has one too, thanks to China,” Chaudhary said.

‘WE DIDN’T GET ENOUGH’

But residents displaced by the Orange Line fear the city’s rapid infrastructure development may leave them on the economic margins – especially in historic areas along the metro’s route.

“For one million rupees ($6,291), we’re never going to find a place in this area ever again,” said Ahmed, standing outside the government-owned Maharaja Building, a crumbling housing block of one-bedroom apartments occupied by entire families.

Part of the building was demolished for the metro project, affecting about 200 residents, including Ahmed, who now rents a room in the section of the block that is still standing.

Today, most of the building’s former occupants fear they have sacrificed property in one of Lahore’s most iconic – and valuable – commercial areas. They expect property prices to rise in the coming years – but know they will not reap the rewards.

More than 50 households in the building were compensated a lump sum of one million rupees per room after being displaced by the Orange Line, according to the Lahore Development Authority (LDA), but many residents are unhappy.

“We didn’t get enough money,” Ahmed said, accusing local authorities of heavy-handedness as they vacated land during the construction process.

“When they came to ask us to leave our houses, they came with the police … How could people fight with them?”

Zargham Lukhesar, a local barrister who worked with activists to challenge the city’s route for the train, said residents – especially those from low-income groups – had often been pressured into selling their property.

“The official would give a document to sign, saying take it or leave it,” he said. “It was easy for the government to harass and push out residents and give them peanuts.”

The LDA said the Punjab government was authorized to take land under the Land Acquisition Act of 1894, a colonial-era law granting the government the right to appropriate land if citizens receive compensation and advance notice.

It allocated 1.6 billion rupees for compensation payments to residents living in government-owned properties and 20 billion rupees to owners of private property, the LDA said.

A spokesman for the LDA said residents were not pressured to sell property, and denied that they had received below-market-value compensation. He added that the government had also compensated residents who may not have had proof of ownership.

“The residents (have) been paid compensation on humanitarian grounds by the government for … (resettlement) even if they had no ownership rights,” the spokesman said.

‘THE CITIZENRY WILL BE PAYING’

After a portion of the Maharaja Building was torn down, residents expected their construction nightmare to end.

But today, building work remains unfinished. A walkway outside the building is lined with sheets of corrugated metal and a temporary mosque sits at the perimeter after the Mauj Darya shrine’s main mosque was leveled for the Orange Line. “The building is not safe and the structural integrity is no longer intact. The government should repair it since we do not have the money,” said Samina Naeem, 40, a mother who still lives in the Maharaja Building.

The government is currently building a new mosque to supplant the demolished one.

It is not only residents who have had their lives turned upside down by the Orange Line, said the barrister Lukhesar.

Six hundred trees were felled along the metro line, which also passes through some of Lahore’s most venerated heritage sites, including the Mauj Darya shrine, which also lost part of its courtyard to the bulldozers.

“The rest of the citizenry will be paying for the low cost of these tickets,” Mumtaz said.

“I look at what is happening to my city, my pocket, my health, my environment – this will make all of us much poorer.”