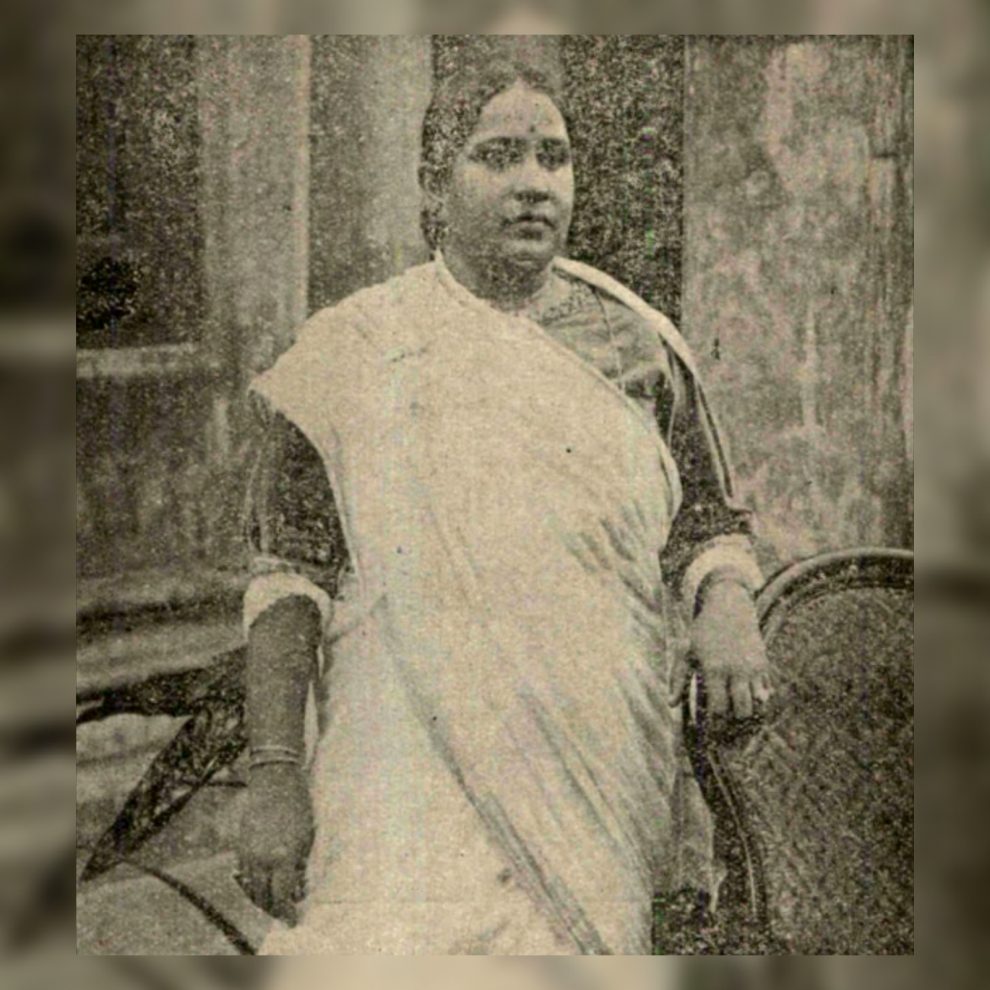 The twenty-fifth day of November 1914 promised to be a cool and pleasant day. Dawn was just breaking and the sun was gently peeking around the horizon. Parukutty, having bathed in the kolam attached to her residence, lined her eyes with kohl, combed her tresses and carefully appraised her reflection that gleamed off the long free-standing mirror in her dressing room. Her vermillion red brocade blouse was in sharp contrast to her crisp ivory, gold bordered mundu. Her long, wavy, black hair, freshly washed, lay open at her shoulders, still damp. The scent of fresh jasmine mixed with the aroma of herb-infused coconut oil wafted in the breeze behind her. Parukutty Amma wore a thick gold chain around her neck, on which dangled a delicate thali. Higher up, her neck was adorned with a traditional Kerala choker of chunky gold hung with several deep green, emerald mango pendants. On both her wrists she wore a dozen gold bangles each. On her ring finger she had a large navratna ring and in her earlobes were round diamond studs. Dangling from the top of her ears were thick, heavy, gold loops. Parukutty had always had a penchant for jewellery, and every night as she set aside her day’s jewels, she carefully selected pieces for the next morning’s visit to the temple. Satisfied with her mirror reflection, she smiled to herself and set off on her daily visit to the Chottanikkara BhagavathyTemple.

The highlight of Parukutty’s day was her visit to the Chottanikkara Bhagavathy Temple.

Legend has it that the area around the temple had once been a dense jungle infested with yakshis and rakshas, where wild animals roamed free. The only inhabitants in the forest were some wandering nomads and sages in meditation. Most people avoided this area for fear of being attacked by wild animals or robbers. Unmindful of the dangers, a man named Kannappan lived in the forest along with his only daughter, Thevi. Kannappan was obsessed with the belief that he must sacrifice a cow every day in order to attain great physical prowess. A ruthlessly cruel man, he stole cattle from the nearby villages in order to perform his daily sacrifice. One day, while returning after stealing two cows, he chanced upon a young calf that had strayed into the forest. Kannappan picked up the tiny animal with the intent of offering it as sacrifice. But when his daughter Thevi saw the beautiful calf, she fell in love with it and begged her father to spare the calf’s life. Kanappan’s only weakness was his love for his daughter. He could not deny her anything. He succumbed and allowed her to keep the calf.

However, one day, as a consequence of his despoiling the countryside, Kannappan was unable to find a single cow. He consequently decided to kill the calf. Thevi would not permit this. Hugging the calf closely, she firmly told her father that if he wished to sacrifice the calf, he must kill her too. Kannappan had no alternative but to relent. From that day forth, it is said that Kannappan was a transformed man. He began to care for and love not just his daughter but the calf too. Gradually, he became less cruel. Unfortunately, a few years later, his daughter died. The calf became his only solace. Years passed, and one night, Kannappan dreamt that there was a divine being beside the calf that had now become a cow.

Awaking with a start, he rushed to the cowshed. There he was surprised to find that where the cow had been tethered was a large stone and right next to it was a rock. It is said that he saw a vision that told him it was Goddess Lakshmi and Lord Narayana that had taken abode in his shed. From then on, Kannappan’s devotion increased and he lived out his life as a most pious man.

Much after Kannappan’s time, his cottage, the shed and its surroundings were overgrown with thick grass and a forest of tamarind trees. One day, many years later, a Pulayi girl was cutting grass. Seeing a raised stone, she decided to sharpen her sickle on it. To her absolute horror, the stone began to spout blood. Hearing her screams, those in the vicinity rushed to the spot. They found the girl to be in a trance. After the initial consternation, it was decided that a pious person must be asked to determine the cause for this strange occurrence. It so happened that a holy man, Edattu Nambudiri, was in the vicinity, on his way to a nearby village. The Nambudiri was apprised of the unusual happening. Intrigued, he agreed to take a look at the stone. As the holy man approached the stone, he saw a divine glow and sensed the presence of Adiparashakti. He immediately performed a puja and made an offering to the deity. Edattu Nambudiri advised the locals that should they worship the mother goddess they would prosper and no harm would come to them. This marked the origins of one of the most venerated temples of Kerala. It is believed that the sanctum sanctorum of Chottanikkara Bhagavathy is the place where Kannappan’s cottage was once located. The Sreemoolasthanam is where his cowshed was situated.

The magnificent present-day Chottanikkara Temple built in the Vishwakarma wooden sculpture style is a far cry from Kannappan’s tiny cowshed. The divine power in the idol is believed to be a combination of the Goddesses Saraswathy, Lakshmi and Kali. And with them at all times is the divine power of Lord Vishnu. The goddess is worshipped in three different forms—as Saraswathy in the morning, draped in white; as Lakshmi at noon, draped in crimson; and as Maha Kali in the evening draped in blue. The prayer ‘Amme Narayana, Devi Narayana, Lakshmi Narayana, Bhadre Narayana’ pays obeisance to all three and Lord Vishnu, whose idol is placed to the right of the Bhagavathy.

As Parukutty sat in the bullock cart that would take her to the Chottanikkara Temple, she smiled to herself recalling a fond childhood memory. At fourteen, still a child, she had been married to a man seventeen years older than herself. Parukutty was then very childish in many ways. She would often pester her husband for things that took her fancy, and gold and gems ranked high on her wish list. Whenever the goldsmith visited the house with his bag of treasures, Parukutty would rush off to her husband and plead, most endearingly, for at least one or two of the ornaments. Her ever doting husband, who usually indulged his child-bride, finally reached the point when he found her demands getting far too excessive. One day, impatient with her and in a moment of annoyance, he brusquely fobbed her off saying rather curtly, ‘I’m not so rich that I can keep buying you expensive baubles. You go every day to worship the Bhagavathy. Ask her for anything you desire and don’t come to me.’ The innocent Parukutty took her husband’s suggestion very seriously and thereafter she spent many hours letting Chottanikkara Bhagavathy know of all her desires. Though it had been several years since then and Parukutty had outgrown her insatiable appetite for jewellery, she still visited the Bhagavathy and confided in the goddess.

The bullock cart now stopped at the western nada of the temple. Parukutty alighted and walked in through the giant temple doorway. As was customary, she walked down the steps to pay obeisance to Goddess Kali before returning to pray to her beloved Bhagavathy. The temple was relatively empty. A few of the regulars were taking their pradishnams around the temple. She entered alone and stood with hands folded, head bowed in deep reverence. Standing before the exquisite idol, Parukutty mentally chanted the Lalita Sahasranamam. Once she had completed the stotra, she prostrated before the goddess and moved to her customary place in a small enclave by the sanctum sanctorum that gave her an unrestricted view of the goddess. She was so regular and constant about her routine at the temple that even the spot at which she sat was always left vacant for her. In later years that spot came to be known as ‘Parukutty’s space’. Seated in the padmasana position, she shut her eyes and continued with her prayers and meditation. In the quiet and stillness around her, Parukutty felt an all-encompassing peace. Her prayers completed, she stepped out of the enclave and walked around the temple compound three times.

On her way out, as was her custom, she walked across to the priest to prostrate before him, receive his blessing and the temple prasad. The priest blessed her and after handing over the prasad to Parukutty enquired, ‘So you have moved house?’ Parukutty, surprised at this question, replied that they had certainly not changed residence. The priest looked puzzled and replied, ‘Oh I thought you had moved out of that house’.

Parukutty was a bit bewildered and confused as to why the priest should pose such a strange question. Quickly putting it out of her mind, she walked back to the bullock cart to head home, absorbed in thoughts of the many chores she had to complete that day. Never in her wildest dreams could she ever have imagined that there was truth in the words of the priest— it was not just her home but her whole life that had changed.

Excerpted with permission from Destiny’s Child: The Undefeatable Reign of Cochin’s Parukutty Neithyaramma, Raghu Palat and Pushpa Palat, Penguin India. Read more about the book here and buy it here.

“The Paradise of Food”: This Urdu classic known for its radical and experimental form is now available in an English translation
“Madam Prime Minister”: This political thriller offers an insider’s view of the workings of the top echelons of government
Comment