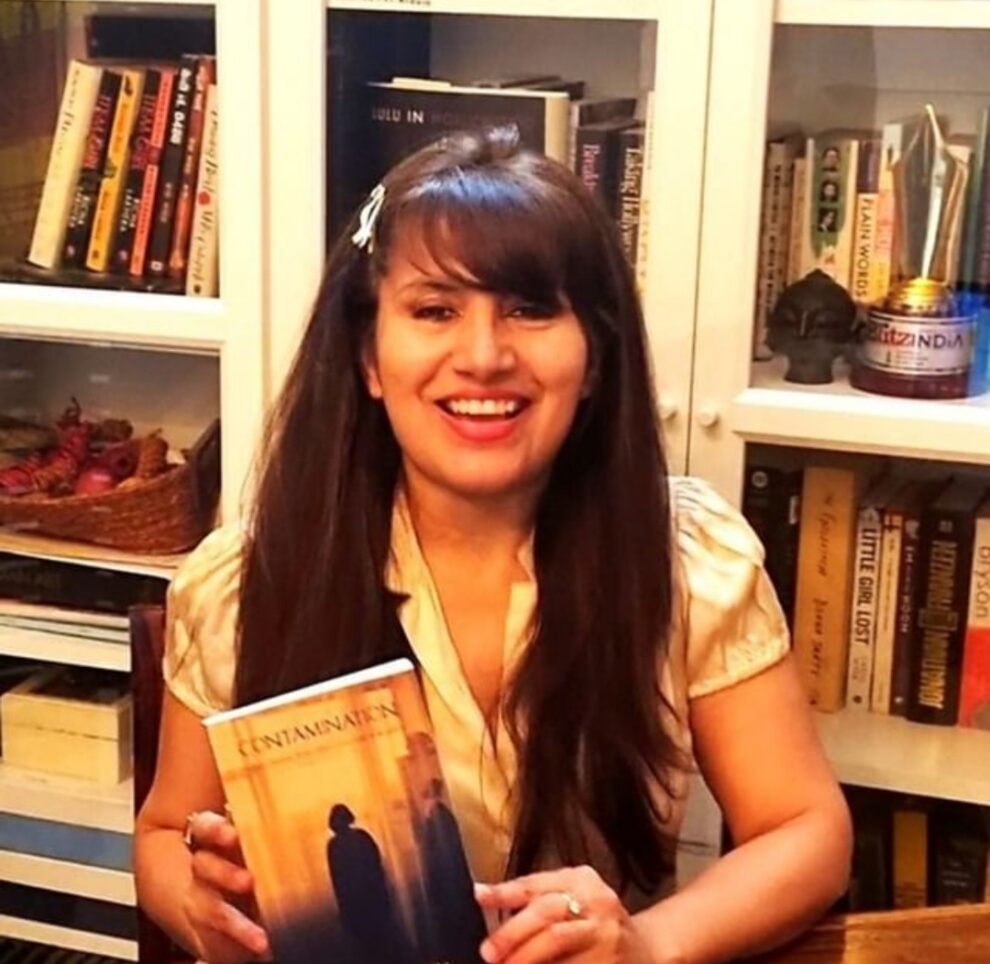 A sudden rifle round shattered the stone in front of her.

Amba bent her head against the flying chips and felt a strange electrical pain all over her skull, a nerve pain. She couldn’t see out of her right eye. She wiped at it quickly, cleaning out the debris, hoping the eye was not seriously hurt.

It cleared and she was relieved. Amba cupped as much water as she could in her palm, and wiped her bloodied eye. She looked at her hand. It glistened red from the blood of her eye.

The blade of stone, blown off the rock by the bullet, had struck her over the right eye and she was thankful it missed the pupil. The injury was superficial, a surface wound, not as bad as it looked. She must not be incapacitated. Not now. She knew very well what they would do with her if they caught her alive. She was safe for now but the indiscriminate firing by the killers caused a mini-landslide and those below were sprayed by small rocks. Just how many of her pursuers were wounded by the flying rocks she was unsure, but it was a good feeling.

Bending her head down, she noticed her knuckles were spotty with red. The eye had clouded again with blood and she used a wet cloth to wipe it off. Luckily it was her right eye, because it was with her left eye that she aimed. It was a shallow cut. The sharp edge of the stone seemed to have hit a nerve, because it was over an hour and the crawling sharp pain all over her scalp not only persisted, it increased manifold. It hurt badly, but at least she could see from both the eyes. Her vision was as good as ever. She turned over on her stomach and lay still for over an hour. Enough for them to be eaten with curiosity. She caught a glimpse of a rifle barrel in a notch and smiled as the bullet found its mark.

Not from far below, a familiar voice out, “Witch, is that all you got?”

“C’mon closer, dog. You will find out,” she shouted back.

“I am scared now. You are shooting cake decorations at me!” Mathera mocked. “She is shooting pebbles. Next, she will throw her shows.”

“Well, come on then, bastard, why don’t you find out? Maybe you are right, maybe you are wrong,” Amba retorted.

“We intend to find out. And, bitch, you won’t be happy with the way we do the finding!” His voice was loaded with murderous intent.

“I will find out then, dog, won’t I? Why are you scared? Why are you hiding?” she shouted, hoping he would fall and bleed to death. She wondered how long they will take to come up and loaded another round and fired. It sprayed out its tiny beads into the air like poppy seeds.

He doesn’t need to make a deal, she thought, he is probably thinking everything is on his side. He just wants to kill her—she thought—take a souvenir—maybe her head—as proof of her death to Madbull.

The call came again. She should not heed. They were deceitful.

What did they take her for? She was angry. Perhaps they thought of her as foolish, green behind the ears. She could not trust the crafty bastards. They would take her alive and kill her in front of the villagers, to terrify them to abandon the land and leave. She needed to stop thinking.

She worked the bolt and the old hull jumped out, smoking, and she grabbed it. Now she slipped one of her coins/dime shells into the breech. The weight of it should give her a good hundred and seventy yards, if not more. She laid a barrel into the notch.

“I will be reasonable,” Mathera’s voice echoed.

“You do not have any malicious intent? You will not shoot me in the head?”

“Stop being a coward.” Amba taunted.

“Do we have a deal?” Mathera chuckled.

“Problem is you keeping the deal.”

Why was he delaying? She knew the only reason could be to keep her talking while his associate crept up on her. Far to her left, a small trickle of sand and rocks spilled down the ravine.

Mathera confidently walked out from behind the buttress of stone, taking irregular short and long steps with his strong mountain legs. Probably, he was guessing the range of her firearm, and perhaps thought she was out of ammo.

“Witch, you think you can outrun my bullet? You think your bones can stop my bullet. The body can take only so much of a ripple. Not equipped to take a wave. Not for girls who pretend to be witches!”

“Thank you for the free class. Your dogs need it more, from the looks of it.”

“She has a mouth, hasn’t she…! Witch has some mouth on her!”

“Your men should be grateful they are still breathing. That they are still alive and in one piece. Now, they can keep coming after me. But the situation will not change. Only they, and you, will get more and more tired. And you know what is the terrible part? That they would give a limb and two to be in the same scared, shitless situation tomorrow, and the day after, for it will mean they are alive.”

“If you are not scared, why are you hiding from us cowards, then? You know, what I think? You are not shooting enough and now you are scared, and in your desperation, you have reverted to the shotgun and its pepper-light loads.”

She did not say anything. Instead, she advanced up the ravine as swift as a mountain goat, her body dark and red with sweat and heat.

“I tell you what. You put down that shotgun and I will make sure my men empty their magazines, and we can have a conversation.”

“I am putting it down as we speak.”

Come on, come on closer, you bastard.

She aimed for the V of the advancing man’s open shirt collar and pulled the trigger. The dimes roared out of the muzzle at eight hundred feet per second with a three-feet long muzzle blast. The gun smoke expanded in a great thick cloud and the stock slammed back into her shoulder, almost hard enough to dislocate it. The load hit him squarely on the forehead. The hyphens imprinted on his skin were drooling thick blood. An expression of complete shock frozen on his face as he fell backwards, his head downhill. The last she saw of him was his boot soles rapidly disappearing down the rocky slope. She jerked off the wet cloth and shoved it in between the butt of the stock and her shoulder. And then, without turning her head, she shoved another dime-loaded shotgun shell, slapped it in, shot the bolt home, brought the sights to bear on Mathera, scrambling as fast away from his dead master as he could. Another bellow and coins hissed through the air, faster than sight, and they sparkled and ricocheted all down the ravine.

The roar of the overloaded twenty-gauge sounded like a grenade had gone off. Flying metal discs pierced into some of Mathera’s backside and he roared in pain and fear. It was too close and the load sliced him sideways and he crumpled senseless from the impact.

When he came to, trapped between two boulders, his leather belt torn off his person, bound him with such that he could not move even if he tried;so were his ankles. Mathera’s eyes flickered with fear at that. Amba finally leaned back, her nerves glowing with charge, and smiled. And then she gave in to the bubble of laughter which rose from her stomach and laughed and laughed till she sucked air and tears streamed down her face. She turned and warmed her hands on the small fire. She left Matherato work on the rawhide thongs that bound his wrists. He had plenty to work on with his teeth, she told him. His teeth had rot set in them. And that was the point. She could hear him try to chew of the cords. Ever so often she heard him curse and spit, a tooth at a time. She panicked him into chewing till he was all gum. She was not yet done with him. An outgrowth of the red mountain shrub known for its deadly roots had caught her attention when she was dragging him, still unconscious, and now she planned to make him helpless altogether. Mathera, exhausted from his efforts, finally slept and she got her chance to carefully dab the shrub’s poison roots, its toxins leaching slowly into his eyes.

“Half the Habishis hate you so much, they are going to stake you down, buck naked, and skin you alive.” Amba said and was surprised when he smirked.

“Now you are asking me questions? Why should I answer you?” His voice sounded as dull as a ruined blade.

“Because if you don’t, I will slash you with my knife and the vultures, who nest nearby, will have the taste of your blood and flesh while you live.”

With a mean swipe of the sharp dagger, she ripped through his arm, spilling fresh blood, and Mathera screamed in pain.

“Witch! I hope you die! Wiiiitch!”

She had to make things quite unpleasant before Mathera revealed what he knew.

Excerpted with permission from Contamination, Richa Lakhera, Om Books International. Read more about the book here and buy it here. 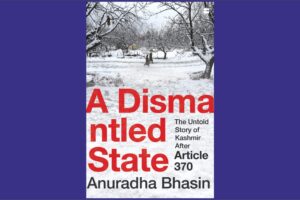