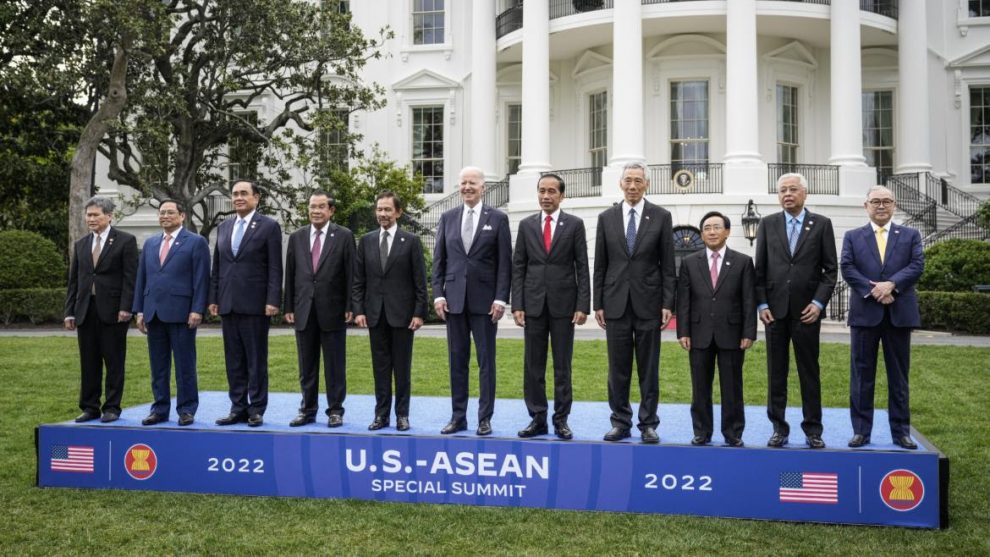 Avishka Ashok
Add Comment
The Chinese government responds to the US-ASEAN summit and cautions the Southeast Asian countries on the selfish interests of the US in the region.

On 12 and 13 May, the US held the US-Association of Southeast Asian Nations (ASEAN) Special Summit in Washington DC. The Summit celebrated 45 years of the US-ASEAN partnership, looked into the future of the relationship and the significance of the US in the region, which has been increasingly dominated by China. The summit focused on economic recovery, health security, climate change, green energy, pandemic recovery, supporting gender equality and women’s empowerment and strengthening the people-to-people exchanges.

ASEAN’s growing importance in the world
The ASEAN countries have been at the centre of fast economic growth and hold potential to further augment the global trade and economic development. According to a report by McKinsey in 2014, the ASEAN region was one of the fastest growing trading hubs along with having an equally significant and diverse consumer market. The ten countries’ trade value accounted for USD 2.4 trillion in 2013. The vast markets enable incessant product demand while the geographic location of the countries make it a vital trading destination along the maritime trading routes.

China’s close relations with ASEAN
The China-ASEAN Summit which took place on 22 November 2021 celebrated the 30th anniversary of their relations. Through the Summit, China expanded its influence in the region and strengthened its economic ties with the ten Southeast Asian countries. China established diplomatic relations with the countries in the region in 1991 and ever since, the trade ties have improved exponentially. The trade between China and ASEAN valued USD 684.6 billion in 2020 which the US-ASEAN trade totalled at USD 362.2 billion. Thus, China economic ties with the region has made it an important partner. China also views ASEAN as a vital economic partner as it ranked first as Beijing’s largest trading partner. Moreover, international initiatives such as the Belt and Road Initiative, Regional Comprehensive Economic Partnership, the Asian Infrastructure Investment Bank have brought China and ASEAN closer because of the deep economic and financial ties with each other.

China’s perspectives on the summit
China does not view the US-ASEAN summit in a positive light and has expressed its discontent with the political and economic interference of the US in the region. On 12 May, China’s Foreign Ministry Spokesperson Zhao Lijian referred to the summit and urged the US to play a positive and constructive role in the region instead of causing discord. Zhao said: “The United States should not use cooperation as a cover to force others to pick sides, or play with fire on issues concerning China’s core interests.”

China has criticized the US-ASEAN summit for the following reasons:
First, the heightened US presence in the region is a part of the US strategy on the Indo-Pacific. China views the summit as the Biden administration’s ticket into the region and fears that the spike in interest is a part of the US strategy on the Indo-Pacific. The Chinese government expects heightened involvement of the US in the Indo-Pacific region and has cautioned the Southeast Asian countries that the US was only trying to get even with China by using ASEAN as a tool against it. Chinese media agencies have highlighted the positive response from countries like Indonesia, Vietnam and Cambodia to the summit. The heads of state of these countries clarified their stance on the cooperation and refused to take sides. Cambodia’s Prime Minister Samdech techo Hun Sen said: “We don’t have to choose between the US and China.”

Second, the US has its selfish interests in the region. At the summit, the US pledged investments worth USD 150 million. However, Chinese analysts expect USD 60 million to be spent only on assisting US partners in establishing and maintaining maritime defense. Political analysts view this expenditure as an attempt to control the South China Sea through the Southeast Asian countries. The US has also been criticized for its one-track objective of focusing on security or creating a resistance against China’s influence in the region while talking about other objectives such as clean energy, climate change, education, gender equality and more. Chinese media agencies also stressed on the US tendency to take decisions unilaterally without considering other countries and their convenience. The US was accused of single-handedly deciding a date for the summit; which later had to be postponed as all leaders were not available on the previously mentioned dates. The actions of the US displayed it exclusive mindset, according to Global Times.

Why does China oppose US involvement in ASEAN?
First, the economic balance in Southeast Asia. Since the establishment of diplomatic relations with ASEAN in 1991 and then acquiring the full dialogue partner status in 1996, China and the ten ASEAN member countries have closely depended on each other’s trade, markets, manufacturing hubs and service sectors. Since 2009, China has continued to remain ASEAN’s largest trading partner. According to the data revealed by the Chinese government, ASEAN ranked first in terms of trade in the January-April 2022 period, followed by the EU and then the US. Although the US already maintains extensive relations with the countries along various diverse fields, China is reluctant to give up one of its most secure centres of economic activities. Increased US presence may pit the Chinese and American goods and services against each other, yet again.

Second, the political interference. The US President Joe Biden’s primary policy focus has been on the Indo-Pacific region and countering the growing Chinese influence in both, global politics as well as the global economy. China is aware of the US intentions and thus, wants to restrict its presence close to its territory. Moreover, the US interference in what China considers to be its internal affairs, such as the violation of human rights in the Xinjiang Autonomous Region and Tibet, the implementation of the National Security Act in Hong Kong, the issues in the Taiwan Strait and the aggression in the South China Sea has further irked the Chinese government into drawing clear boundaries while deal with the US. China, therefore, believes that the US aims to meddle in its affairs while hiding behind the ASEAN countries.

China Reader Daily Brief is a new initiative from the NIAS course on Global Politics at the Science, Technology and International Relations Programme at the National Institute of Advanced Studies (NIAS). The course provides an introduction to Contemporary World Affairs with a research focus to identify, analyse, and forecast trends in world politics.